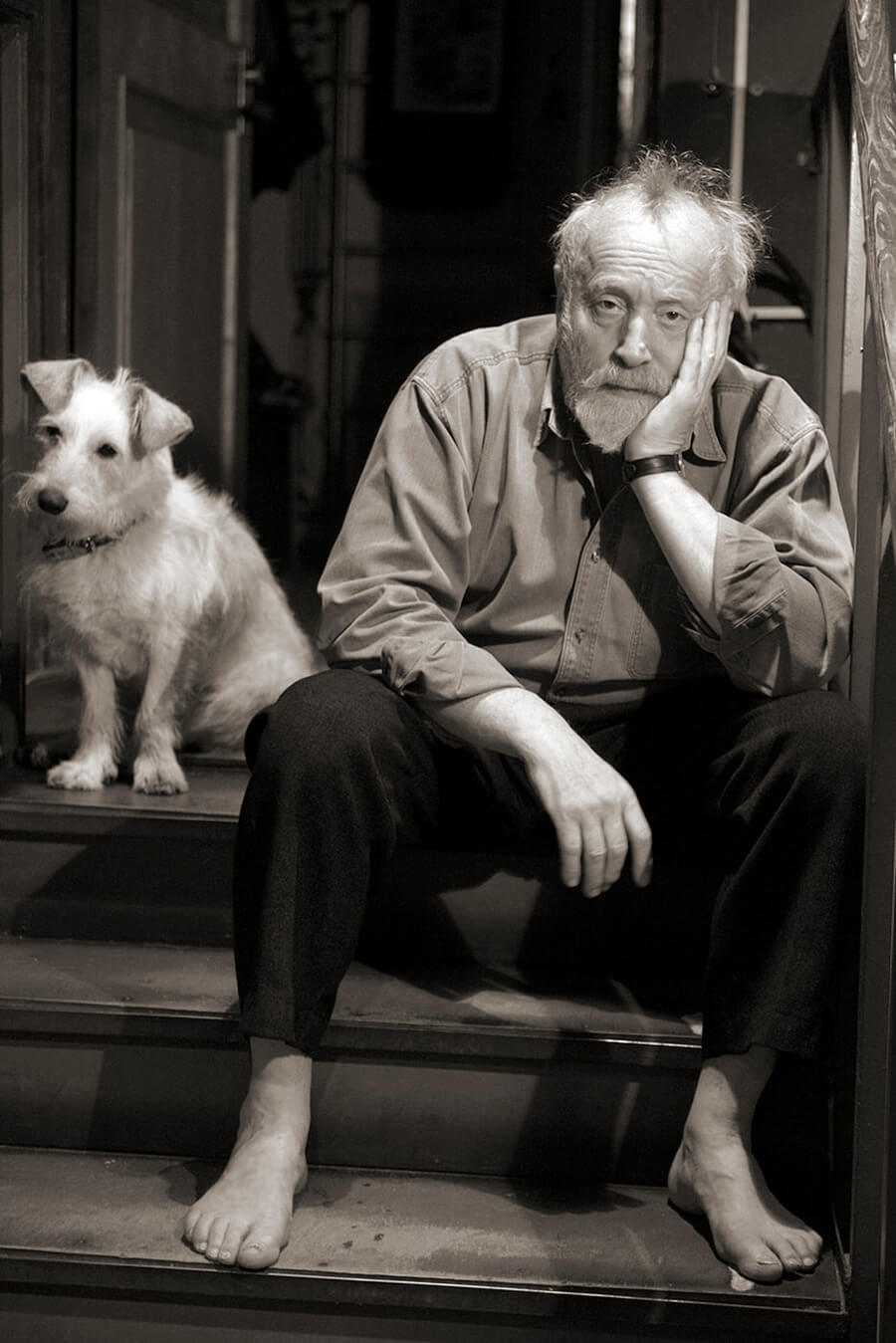 One of my Italian friends, a film critic, liked to repeat the following quote, which he attributed to the Roman Pope John Paul II: "If you want good upbringing for your children, let them watch Soviet animation films." Soviet animation films were filled with deep meaning, they taught young people how to be compassionate, how to ask and answer deep and important life questions, and how to use their imagination. Yet they were simple and accessible, as any genuine work of art should be. Today, this kind of simplicity has given way to primitivism, and sometimes to plain bad taste. At times, it seems to me that people cannot always see the boundary that separates true art from bad taste - simply because the encounters with genuine works of art have become so rare. The film director Sergey Dovlatov once complained to the film critic Victor Shklovsky: "Books are being written, but are never read." To this, Shklovsky responded, "It can be an almost impossible task to explain the taste of a honey melon to someone who has been munching on a bootstrap all his life, and has never known anything better than that".

One thing that underlies these changes is a radical shift in the perception of life itself and its meaning. Sometimes, we do not have even a vague understanding of the foundations that constitute the laws and meanings of this life. The moment we challenge ourselves to step in this direction, we discover with great surprise that life is extremely complex and dramatic. Coping with this discovery is too hard for most of us, and we begin to look for entertainment instead. Fun, comfort, and amusement have become the buzzwords in cinematography and art in general.

If Dostoyevsky were still alive today, he would likely have been inspired to revise his famous novel in many respects. "Am I am a trembling creature or do I have the right," asks the hero of ‘Crime and Punishment”. Today, many will say with little hesitation, “I have the right!” 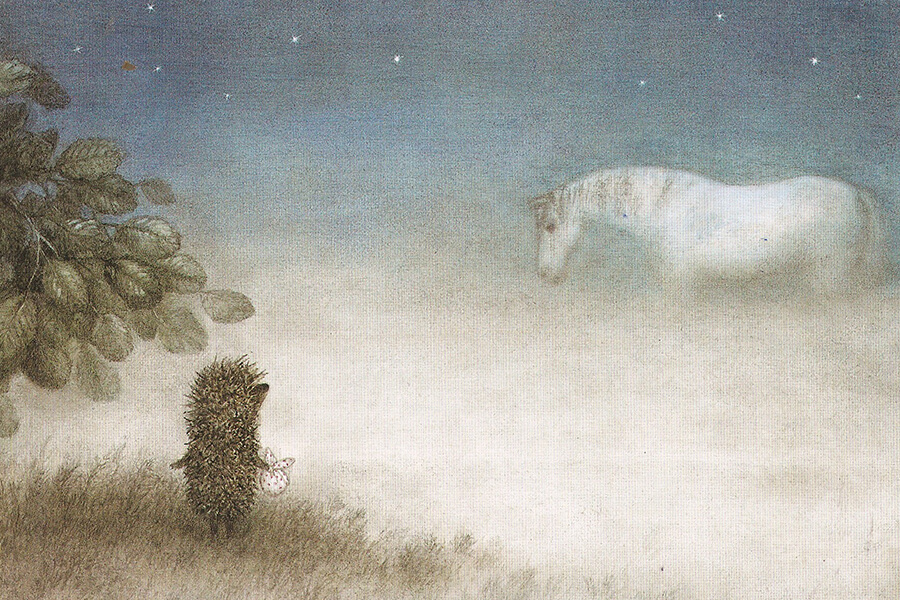 Frame from the cartoon "Hedgehog in the fog"

The cultural context has a powerful influence on parenting. Which parenting strategies do you think would be the most appropriate to the context that you have just described?

Parenting is essentially a complex and challenging task. I think that good parenting very much about empowering one's children and giving them enough freedom for personal achievement and accomplishment. This teaches children to respect themselves and their parents. Parents who emphasize empowerment will not micro-manage. They will not be saying to their children who are learning to draw, "Draw it like this, and not like that". Many parents make the mistake of correcting their children's drawings. This is a sure way to discourage creativity in children.

Children should have the freedom and confidence to be creative; they should have a positive experience of making a tangible product - a drawing or some object of value. I also enjoy working with tools and making things with my own hands. I work with wood, and we have a vice bench in our home. My son Boris was using it a lot and has become very skilled at woodwork.

He set up a blacksmith mini-studio for my grandchildren when they were just seven and eight years old. They were welding, heating, and beating different metal parts. They made a gift for my wife Francesca - a metal candlestick that they have made themselves. It stands on three legs, looks a bit clumsy, but we keep it as a great treasure. It was a great accomplishment for them as well - they made it and they gave it to us. 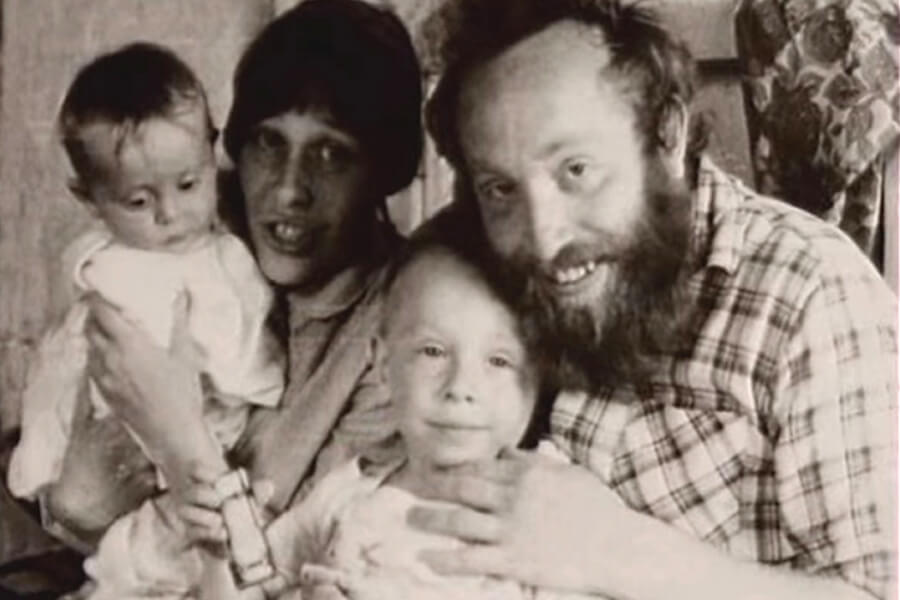 Tell us more about your children and grandchildren.

My son Boris has completed his degree in painting, and has made some impressive progress, and has completed some spectacular projects. He has been working very hard, but I probably had not found the answers to all of his questions in secular art.

So he took up iconography. He met new friends, joined a cooperative, and travelled to a small town outside Moscow to paint some frescoes in a church there. Initially, he was there with a team of several people, but all of them left eventually, and he was left to complete the job almost single-handedly. His only help was a female student at an iconography school. This was the time that changed his life. He married, they had a church wedding, and soon my grandchildren were born, one after another.

Art is very much a part of their lives in one way or another. Our two oldest grandchildren have graduated from an art college. My younger grandchild, Semyon has been admitted to the Stroganov institute of art and music in Moscow. He is studying to be a professional trombone player and is already playing in an orchestra. My granddaughter Varya has entered the Abramov institute of music. Misha has a talent for technology. My youngest granddaughter is eleven. She is learning to play the violin and is already writing music.

Our daughter has two children. Her eldest daughter is a microbiologist. Her son is a music student. 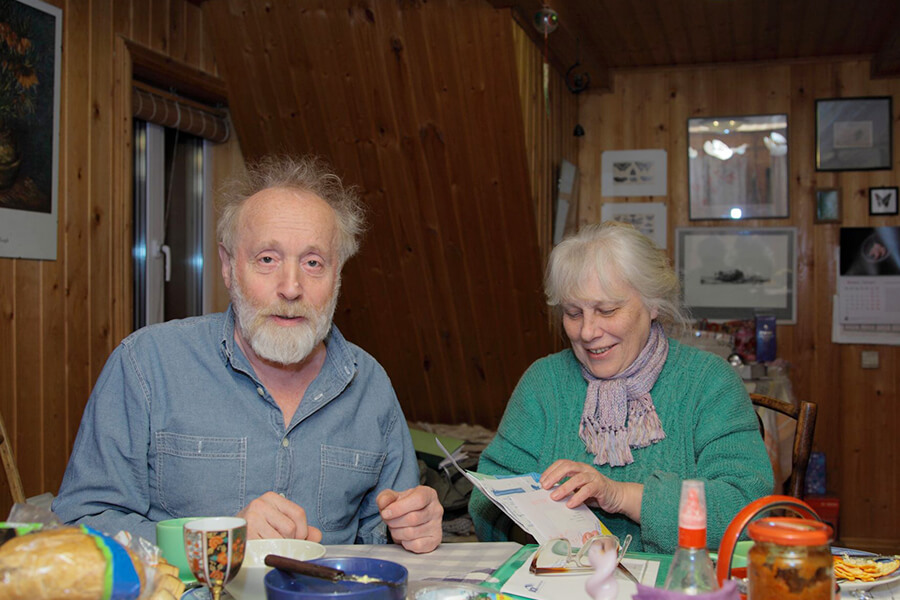 Your older son has become a believer and an iconographer. How possible is it nowadays to build one’s life on the foundation of faith, and what might it take.

Building one’s life on the foundation of faith - this is certainly possible. But it is also a huge responsibility. Having faith in Christ means living by one’s faith, and not just paying lip service to Him. One should always take responsibility for oneself and one’s life choices, and bear it throughout one’s life. One must understand that living by one’s faith is a difficult journey; in practice, it involves making decisions that will not always let one keep one’s image of a tough person with no vulnerabilities. Faith should become the source of one’s confidence and strength. This is the kind of confidence that one should have while working - knowing what you are doing, despite the doubts that may visit you at night. As a film director, it is normal for me to question myself all the time, but once I have started a project, it is important to keep moving ahead all of the time. 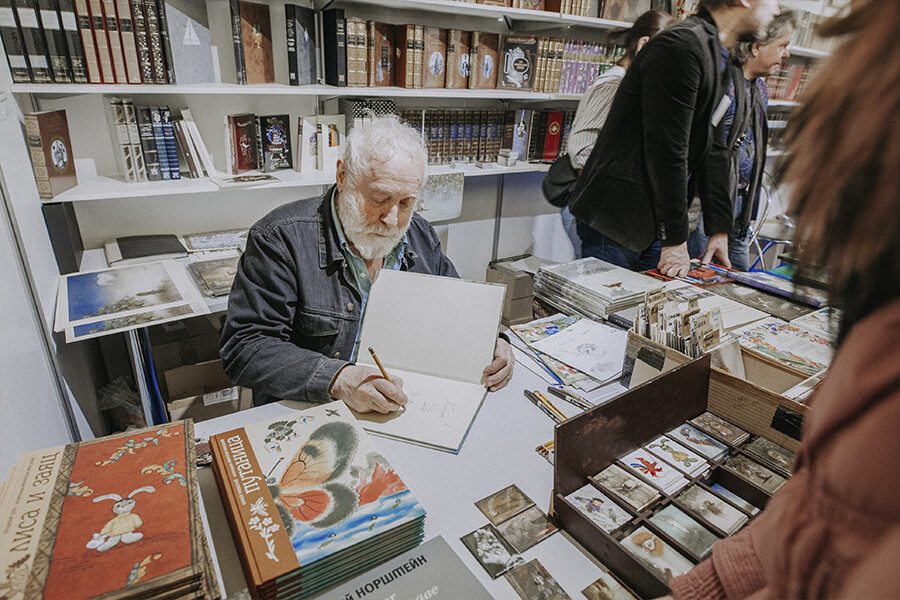 Many of your works seem to have been inspired by biblical images. Where did this inspiration come from?

As an artist, I am always interested in images that would be at least as evocative in stillness as in motion. Where else can one find examples of this if not in fine art? I attach particular value to works that reveal to me something new with every new encounter.

These were exactly the things that inspired me and my wife Francesca Yabrusova in the iconographic image of Jesus Christ as we were working on the character of the hedgehog from our animation film “Hedgehog in the fog”. We were fascinated by His inclination towards timelessness and infinity. One may find a lot of works in European art dedicated to the life of Jesus Christ and His passions, but hardly any of these convey this aspect of His personality. Rublev’s icon of the Saviour is a masterpiece in this regard. I do not know how he had accomplished this, but the touch of infinity that is so visible in his work is certainly something that emanates from heaven. 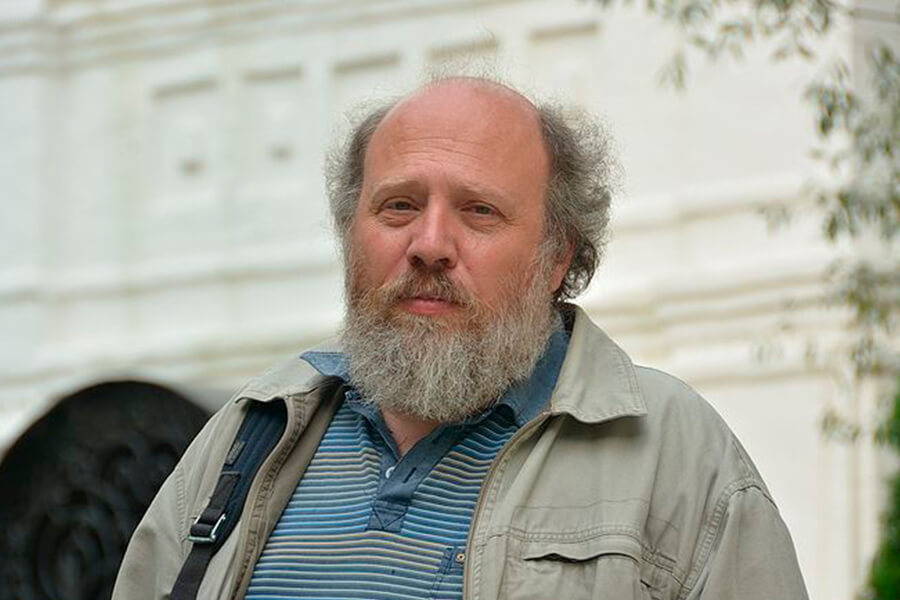 Many Holy Fathers have written that genuine inspiration and creativity are only possible through co-working with the Lord. Do you find that this kind of collaborative relationship with God is present in your work?

I am aiming to reach beyond the boundaries of the conceivable and stretch the limits of our imagination. This is an essential aspect of my creative expression. In the Scripture, Apostle Mark writes, “I do believe; help me overcome my unbelief” (Mark 9: 24). These words mean a lot to me.

One may find the inspiration for reaching beyond the limits in the texts of the New and the Old Testaments. By reading them, we can become attuned to a new attitude to life and to expanding our inner horizons. Words do not amount to anything unless they are supported by concrete action, and the will to take such action is created within the person.

To me, the best example of such concrete action is a job that is well done. My father, for example, was earning his second income by repairing mattresses on Sundays. He died prematurely at 51. But many years after his departure, we many people from his neighbourhood who were strangers to us were telling us how good his mattresses were. His concrete act was to do his job well, for the benefit of another. 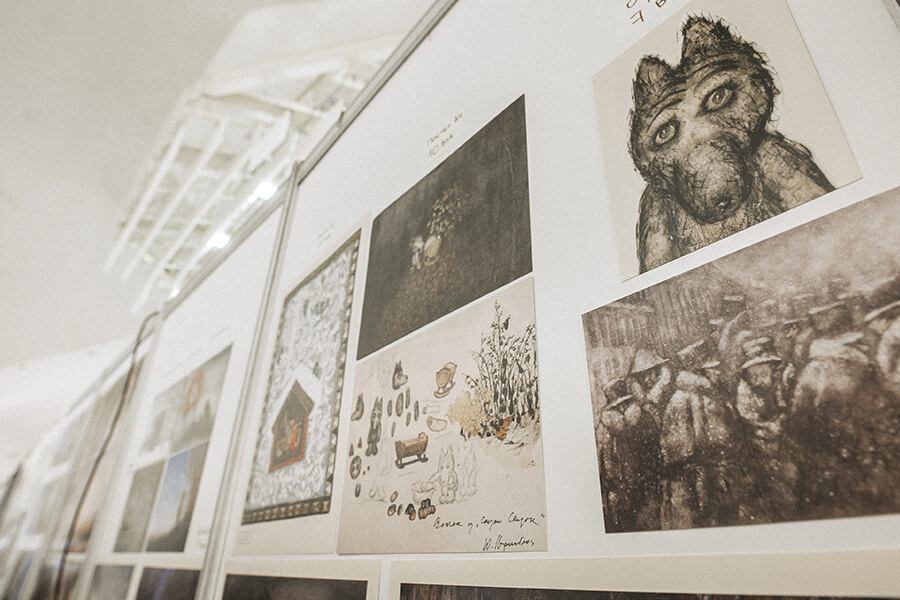 Exhibition of drawings based on Yury Norstein's cartoons

Your recent book starts with the words taken from the Book of Matthew...

Yes, they are excellent works: “Do not store up for yourselves treasures on earth, where moths and vermin destroy, and where thieves break in and steal. But store up for yourselves treasures in heaven, where moths and vermin do not destroy, and where thieves do not break in and steal. For where your treasure is, there your heart will be also  (Matthew 6: 19‒21). I would write these in large letters and display it in the most visible places for everyone to see.

When people are hoarding material riches, what are they doing it for? What is their greatest desire - to isolate themselves from life or to become more secure? Both are vain hopes. Woland, a character from Bulgakov’s novel “The Master and Margarita” said in his conversation with Berlioz, “Imagine, for example, that you have taken charge and become the master of your own life and the lives of others, and you have come to enjoy it when suddenly you have been diagnosed with the sarcoma of the lung, and you rule is over!”

These people are putting their trust in finite things. Money is finite, And our physical lives have an end but are infinite in another sense.

At the men's farmstead of Saint Elisabeth Convent, Yevgeny Tkachenko has an important job. He is a cook, and he is the earliest to rise among… 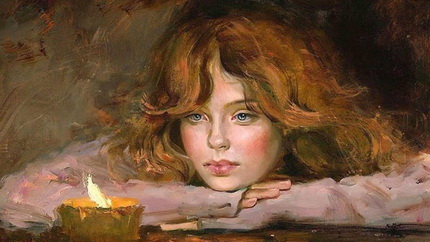 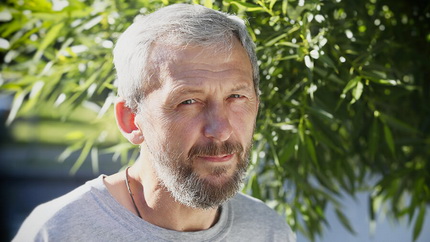