Saint John the Persian, a great martyr of the fourth century, is also called "James cut into pieces" for the terrible death he endured. His life is a story of repentance and God's ultimate mercy and forgiveness.

Born into a wealthy famous and pious Christian family, he received an excellent education and served at the court of the Persian king. He entered a Christian marriage and raised his children in the Christian faith. As a courtier of the Persian king, he quickly became his favourite. He delegated to him many of his royal functions, sought his advice on many matters of the state and lavished him with rewards and compliments. While James was away from his family on a military expedition, he succumbed to the King's advances and worshipped with him the Pagan idols and offered sacrifice to them.

When news about James' apostasy reached his family, his wife and mother wrote him a letter begging him to repent and return to the true faith. "We ask you a single question, deign to answer: where is this king now, for whom you have made such a great sacrifice? He died, as the last of the men, he fell into dust: what can you await from him now? Will he offer you a refuge from the eternal torment?" They were also adamant in having nothing to do with an apostate and would renounce him as their husband and son unless he reconsidered.

James was deeply moved by the letter. He retreated to his tent, found the bible and fell on his knees in vehement prayer. Some courtiers heard his pleas of remorse and reported him to the king. The king summoned him and questioned him about the motives of his conversion from Paganism back to Christianity. "Was not your being a Magi the reason for the favours that you received from the king, my predecessor?" Anxious to avoid another temptation to return to Paganism, James answered boldly, with the phrase from his family's letter, "Where is the king with whose favours you are referring to? And will he save me from the eternal torment?" Having verified that James had left the Pagan faith, the king searched in his mind the cruellest penalty for him to show an example to others. He was sentenced to being cut into pieces at the level of the joints, starting with the fingers.

When he lost ten fingers, his friends and even the judges implored him to spare himself of further torments and renounce Christ. To make him change his mind, the judges said that he could still live a satisfying life without his fingers; he could end the execution with one word, and remain alive. But the saint remained firm, finding strength in prayer. 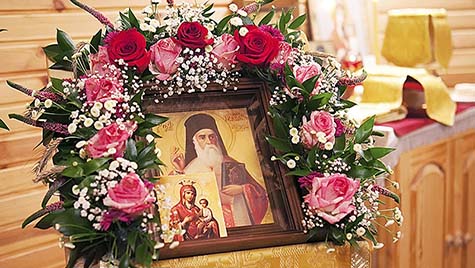