The tradition behind the Kutia, a recipe and cooking instructions

Kutia – a meal for the strict fast 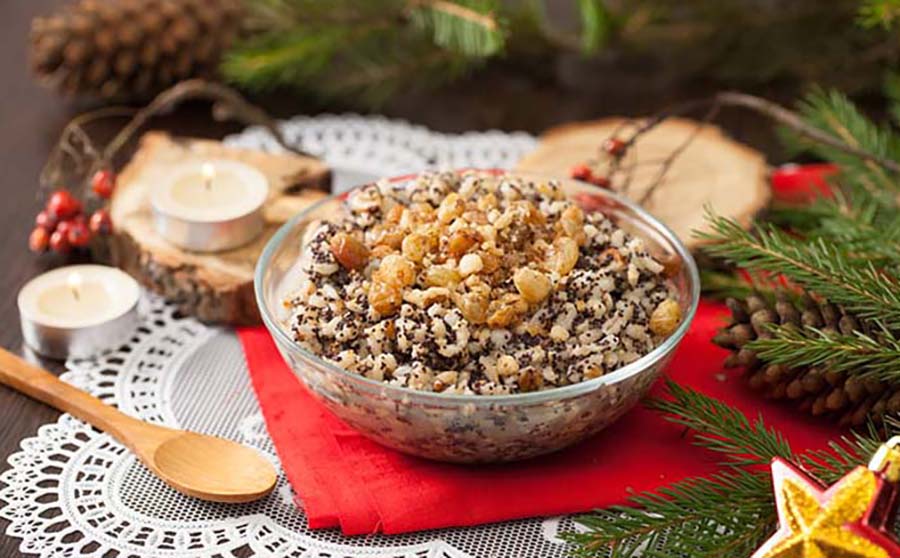 In the Orthodox tradition, inner spiritual fulfillment is often expressed in external forms. For example, the rich decorations of the churches, icons with gilded covers and embroidered vestments of priests symbolize the Kingdom of Heaven. All this helps believers to see the beauty of the invisible world. In the same way, food brought to the church has a symbolic meaning. The ritual dishes that Christians eat during strict fasts include kolivo (translated from Greek as grain), also known as kutia.

Kutia is traditionally prepared from grains of wheat, rice or barley with honey. Sometimes peas or pearl barley are used. Grain symbolizes the Resurrection, and honey is the sweetness of paradise life. This is a nutritious dish, rich in fiber and various elements, quite simple and quick to prepare, which is called "in a hurry". In appearance and taste, it is very similar to fluffy porridge. Previously, in monasteries, when monks needed something to eat between services, they boiled and ate kutia.

Kolivo and kutia have another variety called "sochivo". This dish is traditionally prepared on the eve of major winter feasts such as the Nativity of Christ and the Epiphany of the Lord. If lenten and memorial kutia are crumbly in consistency, then more liquid is added to this dish, such as almond milk or brew. Subsequently, the evenings in which sochivo was eaten was called socellniki.

First, the Christmas Kutia is consecrated at the church during the morning service, then brought home and served on the table at dusk. On Christmas Eve, it is customary not to eat anything until the appearance of the first star in the sky - in memory of the Gospel events and the star that announced to the Wise Man the imminent birth of the Savior of the world. Then when a family sits down for an evening meal, it is customary to begin it with a consecrated sochivo.

“Kutia was cooked from wheat, with honey; uzvar — from prunes, pears, whispers... They put it under the holy image, on the hay. Why?.. And as if it were a gift to Christ. Well... as if He is in the hay, in the manger. Sometimes, you wait for a star, you wipe all the window glass... The first star, and the other one...”

S. Shmelev, from the story "Summer of the Lord".

For 2 cups of wheat, use 12 cups of water, lightly salt and put to cook for 2-3 hours, periodically checking the readiness. Then throw in a colander and rinse with cool running water. In a uniformly thin layer, lay out the wheatberries on a towel or clean cloth prepared in advance on the table and leave for 40-60 minutes to dry. After that, pour the cereal into a large bowl and gradually add all the ingredients except powdered sugar. Mix everything thoroughly until it becomes a homogeneous mixture. Then shape the mixture into the bowl and smooth the top flat with your hands. Sprinkle it with crushed breadcrumbs, and on top - powdered sugar through a fine sieve. Decorate as desired.

What else can be added to Christmas?

As already mentioned, any cereal and grain can be used to make kutia, not only rice and wheat; although these ingredients are traditional. However, some cooks prefer to use lentils, bulgur, pearl barley, oatmeal, peas or millet. Sometimes different types of cereals are mixed in equal quantities.

As additional ingredients, not only poppy seeds and nuts can be used, but also dried apricots, prunes, dates and other dried fruits, dried cherries, candied fruits, chocolate chips, fresh fruits, bananas, citrus fruits - oranges and tangerines, pineapples - fresh and canned, currant berries and cherries (frozen in winter). Those who like it can use toasted sesame seeds instead of nuts.

Kutia is best cooked on the eve of the scheduled date. A few days before the feast or memorial day, you can cook wheatberries, but mixing all the products in advance is not recommended: honey and fresh fruits can ferment during storage, and raisins will quickly lose their taste. Kolivo and Christmas Kutia are usually richly decorated with nuts, dried fruits, candied orange slices, fresh fruits and berries - whatever is you can imagination.

Sometimes special stencils are prepared for the decoration of a festive dish in the form of ornaments or images of saints. This, as a rule, is done by artists - masters of their craft. They use colored breadcrumbs in their work. To do this, white bread is dried in the oven. Food coloring is diluted in water, crackers are dipped into this liquid, allowed to dry again and passed through a meat grinder. Then the breadcrumbs are sifted through a fine sieve. Powder from crackers is not advised to be stored for a long time, as it can quickly become rancid. Decorated in this way, the kolivo becomes a real work of art and is consecrated in temples on the most solemn and important events. 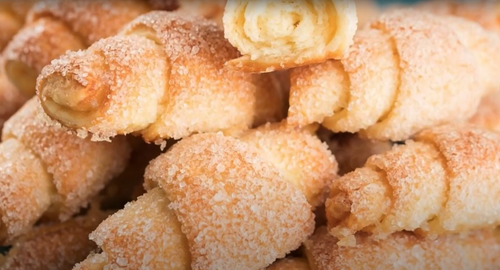 Rugelach cookies are everyone's favourite treat! During the Great Lent period dairy products are excluded. Nun Tatiana shares with us this rugelach cookies recipe that can be used during the lenten season. 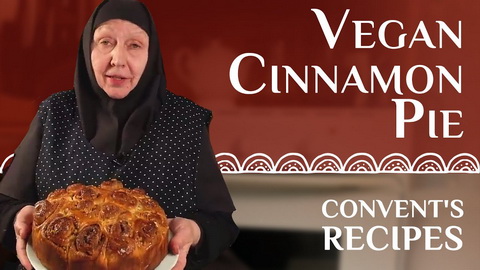 In this video novice Alexandra from St. Elisabeth Convent shares with you quick and easy-to-made recipe of Vegan Cinnamon Pie. 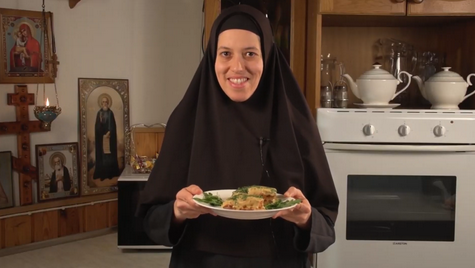 Nun Rebecca is a Brazilian who lives at St Elisabeth Convent. She decided to share with us a recipe for a rather extraordinary dish - Brazilian-style fried fish with pineapple. Variations of this dish can be found in a few other national cuisines. 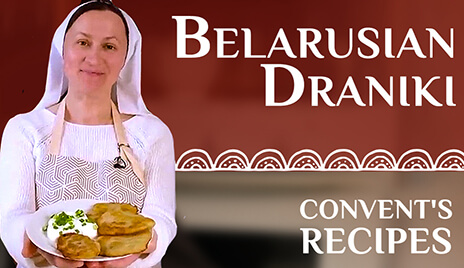 Today we will cook something that everyone likes. At least Sister Tatiana has not met such people who would not like Belarusian draniki. And we will cook them from the simplest products: from potatoes, onions, salt and oil. 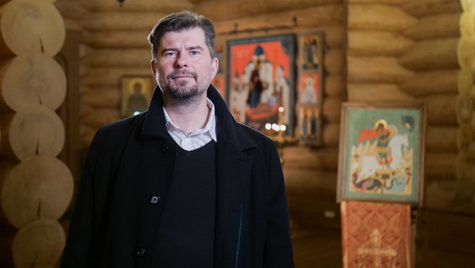 Uzvar, a traditional dessert for your Christmas table - three recipes 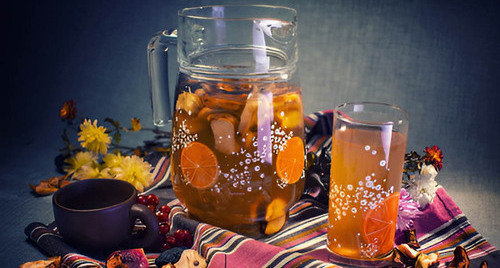 We know about it from the timeless books of the Russian writer Ivan Shmelev. It is called Uzvar, a drink prepared from dried fruits. Its herbal variants have medicinal properties. Keep reading find out more and get a recipe! 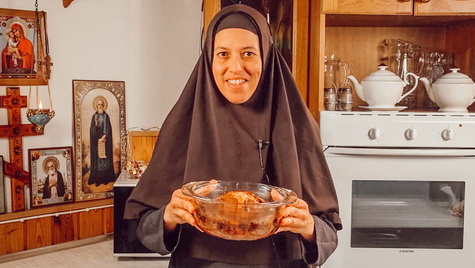 Nun Rebecca is from Brazil and today she decided to share with our readers a recipe for one of her country’s national cuisine dishes - Brazilian banana pie. This banana pie is easy to make and has an eggless option for those, who are vegan or… 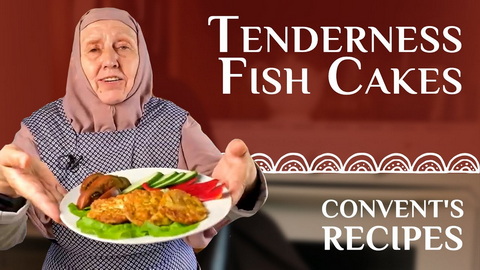