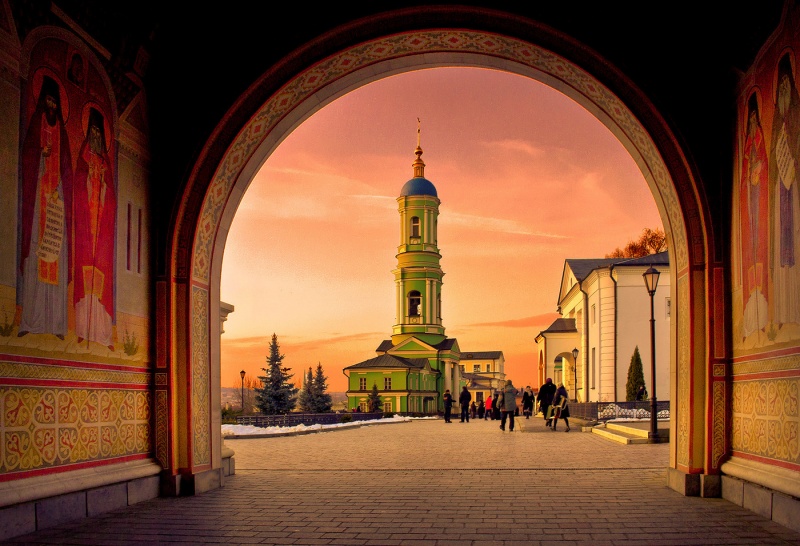 “You are the light of the world. A city built on a hill cannot be hidden. No one after lighting a lamp puts it under the bushel basket, but on the lampstand, and it gives light to all in the house. In the same way, let your light shine before others, so that they may see your good works and give glory to your Father in heaven. (Matt. 5: 14-16)

History of the Monastery

The Optina Monastery is a famous stauropegion of the Russian Orthodox Church, located in the Kaluga region. A stauropegion is a church or monastery exempt from the jurisdiction of the local bishop and directly subject to the highest authority of the territorial church.

Unfortunately, no reliable information about the foundation of this ancient shrine has been preserved. Our knowledge of its early history is based on a few surviving legends. According to one source, the monastery was once inhabited by both monks and nuns. In ancient Rus, such monasteries were called Optins.

This version is also mentioned as the most feasible in the document titled Note on the Foundation of the Optina Monastery.

The earliest surviving written mention of Optina dates back to the late 16th century. The monastery then had one wooden church, 6 cells and only 12 monks, including its first known Abbot Sergius. In 1689, the Presentation Cathedral was built. During the reign of Peter I (1672-1725), Optina was so small and poor that the monastery lost its status due to paucity of brethren.

Optina was eventually restored in 1726.

At the end of the 18th century, the Monastery drew the attention of Moscow Metropolitan Platon. With his blessing, the construction of Optina began. Father Abraham, who was put in charge of it, did not leave his ministry until his weakness forced him to ask to be released from this work. Optina Hermitage flourished, and the number of its inhabitants exceeded 150 people in the middle of the 19th century.

In 1923, during the anti-religious persecution, Optina was closed with many of its churches destroyed. The holy place was desecrated and turned it into a number of secular institutions. The surviving churches were used as a sawmill, and the skete was turned into a recreation center. On June 3, 1988, the first service was held here after a 65-years break.

Today Optina receives pilgrims. People continue coming here for the help of the fathers, as well as to honor the new martyrs and worship the living Christ. The grandeur and tranquility of this place are impressive and make you forget that 40 years ago it was in ruins and no sound of church bells was heard here.

Eldership is a special gift of the Holy Spirit, a talent that St Paul the Apostle calls the gift of discernment (cf. 1 Cor. 12: 10) and which is valued by the holy fathers above all other gifts. 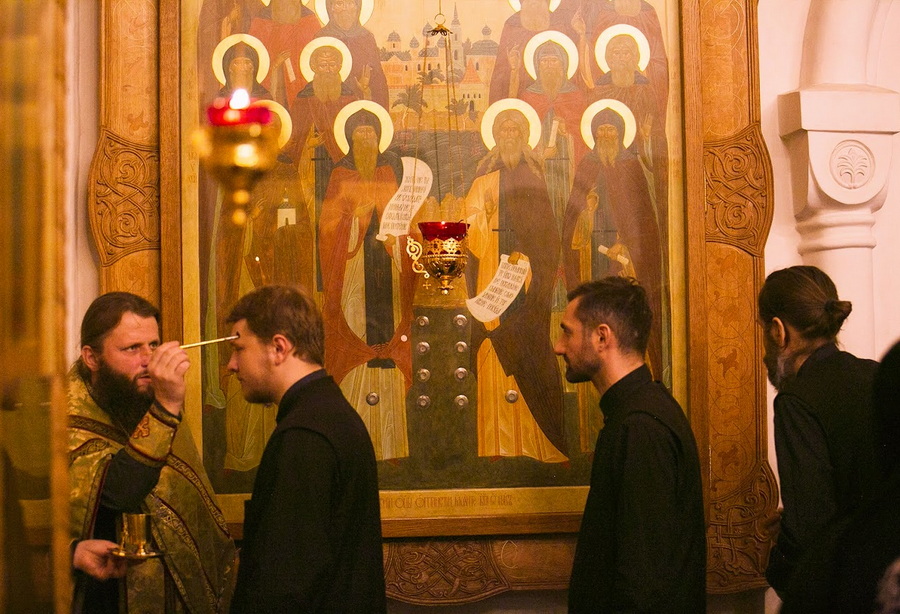 The essence of eldership is represented by the practice of choosing a monk among the brethren who is experienced in spiritual and ascetic life and endowed with the gift of discernment. This monk becomes the spiritual father, i. e. the elder of the entire monastic community. His disciples come to see him at any time of day or night to reveal their thoughts, desires, and deeds to him and to ask for his advice and blessing. They completely abandon their will for the sake of fulfilling the all-good will of God, implicitly obey the elder and follow all his instructions.

For this they receive a great reward from the Holy Spirit.

Elders become teachers of spiritual life not only for monks but also for lay people. Their teaching is about the importance of having a pure heart, fighting against passions and also prayer. The Optina elders taught the art of acquiring the grace of the Holy Spirit and preparing for the Kingdom of God.

The Elders of the Optina Monastery

Venerable Lev can be considered the first elder of the Optina Monastery. After the bright era of St Sergius of Radonezh, the traditions of eldership were interrupted. During (and after) the reign of Peter I, monasticism was persecuted. St Lev of Optina (1768 - 1841) lived in the time when monastic life mostly revolved around fasting, labors, bows, and sometimes even fetters. Unceasing prayer, purity of heart, revealing one's thoughts, everything that Lev had learned from his teacher, Father Theodore (a disciple of the great elder Paisius Velichkovsky) was incomprehensible to many monastics.

Father Theodore was accompanied all his life by terrible slander and envy. The same fate befell Elder Lev. Travelling around different monasteries, Fr Lev met Br. Macarius who later became his assistant during his eldership in Optina (1829 - 1841). Macarius also became the monastery's following elder. Together they raised the great Optina elder Ambrose.

St. Ambrose of Optina. You can order this and other icons in our Iconography Studio

In the 19th century, Elder Ambrose had a tremendous influence on the spiritual life of the entire Russia. Miracles still occur at the relics of the elder with people being healed from many (often incurable) diseases.

The future elder came to Optina in 1839. In 1840 he was vested in a monastic habit and in 1842 he took monastic vows with the name Ambrose. In 1843 Ambrose became a hierodeacon, in 1845 a hieromonk. Behind these short lines are five years of ascetic life and hard physical work.

During his trip to Kaluga for ordination as a hieromonk (1845), Father Ambrose, exhausted by fasting, caught a severe cold and fell seriously ill. Since then, he has never been able to fully recover, and his health condition was so poor that in 1846 he was put on the retirement list due to illness. For the rest of his life, he could hardly move. He could not tolerate cold or drafts and ate only liquid food in amounts that would barely be enough for a three-year-old child.

Despite these difficult trials, Father Ambrose always received people. None of the elders ever opened the doors of their cells to a woman. St Ambrose not only received women and was a spiritual father for many of them, but he also founded a female convent near Optina (Shamordino Convent) where he died on October 10, 1891. In June 1988, the Venerable Ambrose was the first of the Optina elders to be canonized by the Local Council of the Russian Orthodox Church. It was through her elders that Optina shone forth in Russia and to the whole world. People have always come here for support, spiritual advice and solutions in difficult life situations.

Fourteen of the Optina elders were canonized by the Russian Church. To this day, Orthodox Christians from all over the world resort to the help of the holy elders. Just as they did in their earthly lives, they continue to pray at the Throne of God for everyone who comes to them with their sorrows.

Dostoevsky wrote about Optina in his work The Brothers Karamazov. As it is noted in the monastery's Book of Visitors' Records, the writer's trip to the monastery took place in June 1878 and was related to the writer's grief caused by the death of his youngest son Alyosha. 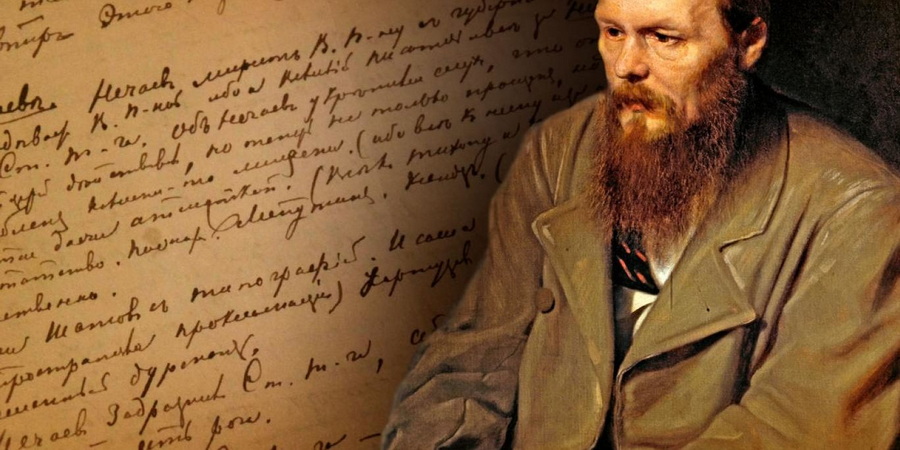 This fact is also confirmed by the Memoirs of Dostoevsky's wife Anna. She writes the following:

“Fyodor Mikhailovich returned from Optina consoled and considerably more calm. He told me much about the customs of the monastery where he got to stay for two days. Fyodor Mikhailovich had three meetings with Fr Ambrose, the famous elder of that time. The first one was in a crowd in front of many people, and two more were in private and left a deep and heartfelt impression on him. When Fyodor Mikhailovich told the elder about the misfortune that had befallen us and my grief, which had manifested itself too violently, the elder asked him if I was a believer, and when Fyodor Mikhailovich answered in the affirmative, he asked him to convey to me his blessing, as well as the words that elder Zosima later said to the saddened mother in the novel <...> From the stories of Fyodor Mikhailovich it was clear how deeply this venerable and clairvoyant elder knew people’s hearts".

The second book of the novel "The Brothers Karamazov" was completed 3 months after the writer's return from Optina. The chapter titled Women Believers describes Elder Zosima receiving visitors. Consoling a woman crying for her son who had died at the age of three, the Elder says that the baby “is now before the throne of the Lord, rejoicing and praying to God for you. Therefore, you should not cry, but rejoice".

Sayings of the Optina Elders 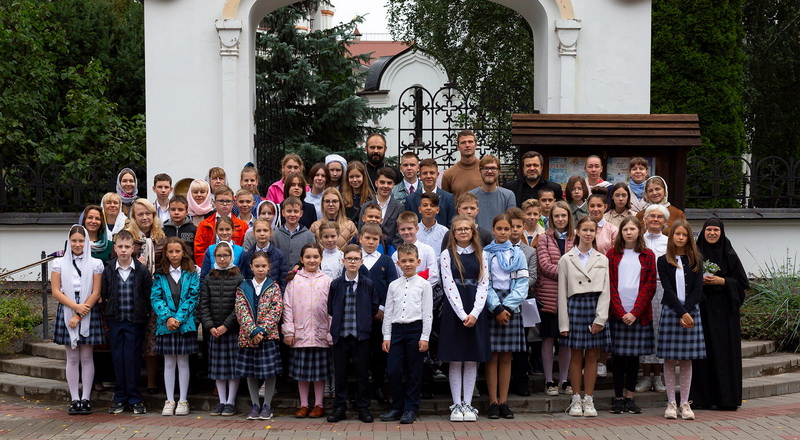 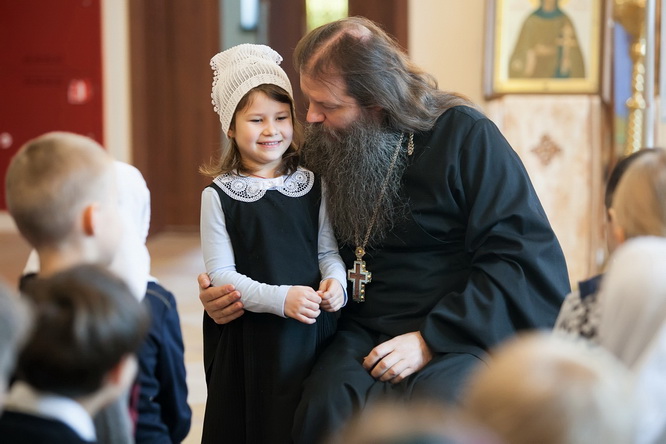