Saint Clement of Ancyra, an honoured branch of the vine of Christ 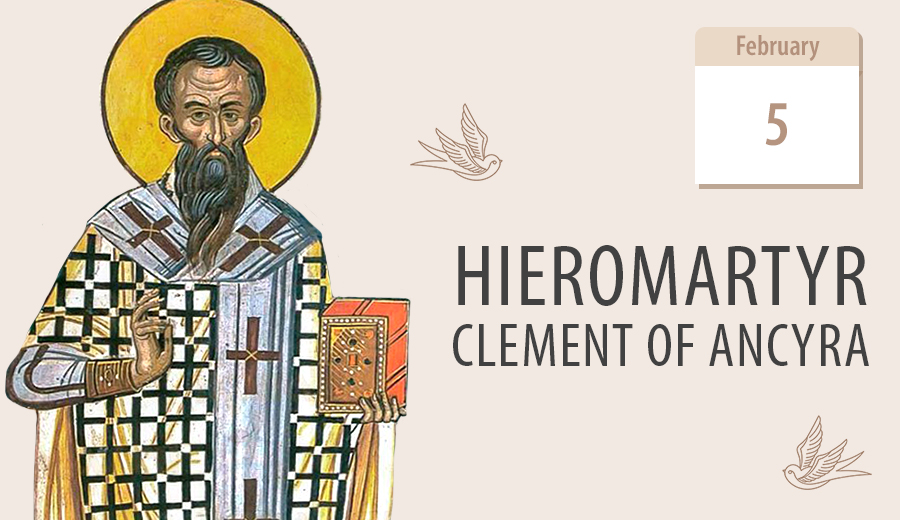 He was born in 258 to a Pagan father and a Christian mother. Orphaned in adolescence, he was raised by a pious woman named Sophia. She also took into her care the children from other families whom their parents abandoned because they could not feed them in a famine that broke out in their region. Clement prepared them for baptism, and many of them later died as martyrs.

Saint Clement dedicated himself to service at church. He served as a reader, then a deacon. He received ordination as a priest at eighteen, and two years later he became bishop.

During his service, the Roman Emperor Diocletian unleashed vicious persecution of Christians. He was arrested on a report and taken before the governor who offered him to worship a pagan idol and go free, or suffer brutal torture. Clement confessed his faith in Christ, and the governor acted on his threat. He had his mouth smashed with heavy stones, he was turned on a wheel and burned on slow fire. Saint Clement prayed to the Lord, and He kept him unharmed and healed his wounds.

Struck by the bravery of the saint, and his miraculous healings, many Pagans believed in Christ. The governor, who was unable to shake Clement’s will, sent him to the emperor for another round of cruel tortures. He withstood these and was thrown into prison, where soon began to receive scores of visitors seeking healing and baptism. He turned the prison into a Christian church. Angered, the emperor executed many of the new converts but sent Clement away to Nicomedia, and from there to Agrippina, where he was subjected to public torture. Yet seeing the inhuman tortures, the witnesses were reviled. They pelted the torturers with stones and set Clement free. Many converted to Christ and became members of the Christian Church, where Clement became the priest. Clement was re-arrested and sent him back to his hometown Ancyra. There, he was tortured but released by the city's Christians. He was killed by the soldiers as he was serving liturgy. They beheaded him and his two deacons in front of the altar, but no one else was harmed.