Cyril of Turov, a Saint of the Belarusian Church

Saint Cyril of Turov, a Rule of Faith and Example of Humility 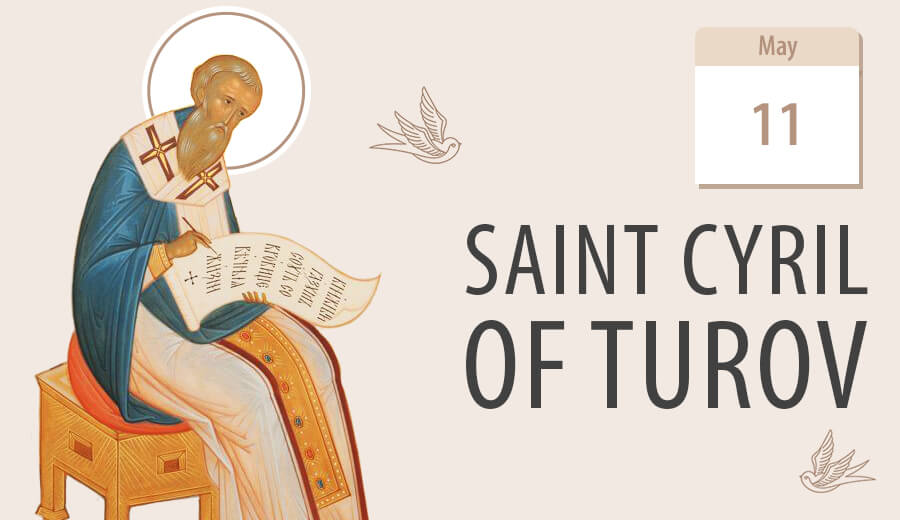 The Church glorified him as an example of faith, an image of humility and a teacher of asceticism. Slavic scribes and men of letters put his writings on a par with the works of the Holy Fathers of Byzantine and termed him the Russian Chrysostom. Thousands attended his homilies, and many more still pray with the words of the daily prayers and repentant canon he wrote. He takes a prominent place in the synaxis of Belarusian saints. Yet he described his role more humbly: “I am not a harvester, I gather sheaves of grain.”

Saint Cyril of Turov (c.a. 1130 – 1182), whose feast day is celebrated on 11 May spent all of his life in and around Turov. Here, he received a brilliant education, accomplished spectacular feats of monastic asceticism and wrote his masterpiece works. Here, he served as bishop and engaged in his tireless labours to educate and enlighten his monastic brethren and laity “for the benefit of all,” as the chroniclers of his time wrote.

He was born into a wealthy and powerful family. His father governed the Turov principality as the representative of the Great Prince of Kiev. Now a small provincial town in Southern Belarus, Turov was then a major economic and trade hub and a centre of culture and education. His parents prepared him for a grand secular career, but he chose the life of a monastic, a highly unusual decision for a man of great standing in his time. He joined one of several monasteries near Turov without his parents’ consent. He renounced his inheritance and estate to dedicate himself to monastic life.

He passed all the stages of monasticism and was the only Belarusian saint who ascetised as a stylite. In early Christian asceticism, a stylite was a hermit monk who lived for many years in solitary prayer on top of a pillar. Seeking solitude, he retired to a cell on top of a monastic tower and spent all his time praying and writing most of his masterpieces. Yet word about his ascetic deeds was spreading, and monastics and laity began to flock to him for advice. Eventually, he became the hegumen of his monastery and bishop of Turov. However, he did not let the temptation of power compromise his humility. As hegumen, he tightened the monastic rules and showed an example in following them. He continued strict fasting and ascetic practice in his service as bishop.

Saint Cyril of Turov left a rich legacy of works that still impress and inspire. Monastics will find valuable instruction in prayer and asceticism in his epistles on monasticism. Christians still pray with the words of his daily prayer rule and repentant canon. Most inspiring of all is his message of hope and joy at the resurrection of Christ and His victory over death and sin. “Now repentance thaws the winter of sin, and the understanding of God melts the ice of unbelief," wrote St. Cyril in one of his most powerful homilies. Hopefully, these words will not cease to encourage us as we proceed on our journey of salvation.