A homily for the feast of Saint George the Victorious

Saint George the Victorious, a warrior for Truth 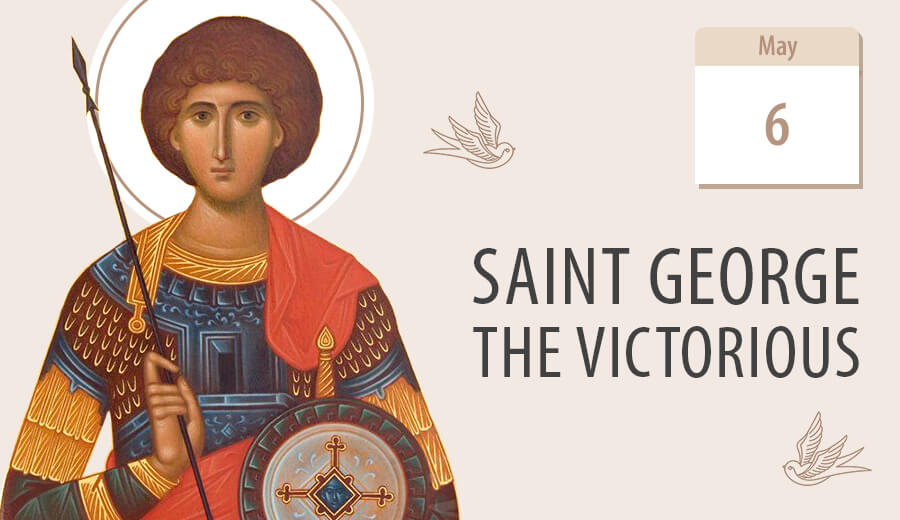 On 6 May, we commemorate in our churches Saint George the Victorious. We glorify him as a Great Martyr because he bore unfathomable torments challenging human imagination. As a true confessor of the faith, he stood with Christ and endured for His sake. As we read in the Gospel, "Whoever acknowledges me before others, I will also acknowledge before my Father in heaven." His trials and passions brought many to believe in Christ.

Icons depict him piercing a dragon with his sword. As the Church Tradition holds, the dragon lived in a lake at the foot of the Lebanese mountains near the saint's hometown Beirut. The dragon extorted human sacrifices. Every year, the residents of Beirut drew lots to feed their children to the dragon. One day, the turn came for the ruler of the land to sacrifice his daughter. The young woman, who had not converted to Christ but heard about His power, prayed that He would save her from her horrible death. As she was praying, the victorious horseman George arrived. God sent him to protect the young woman and bring others to Christ. When the serpent emerged from the water, he slew him with his sword and called on everyone present to thank the all-merciful God for their wonderful deliverance. As we read in the life of Saint George, more than 25 thousand men, and an indeterminate number of women and children took baptism.

Saint George the Victorious accomplished multiple other feats during the reign of the Roman Emperor Diocletian, who launched vicious persecution of Christians and the Christian church unseen in human history. To reverse the decline of Paganism in the empire, Emperor Diocletian ordered the destruction of all Christians. Saint George gave away his estate and freed his slaves. Then he came to the place where idol-worshippers gathered and confessed his faith in our Lord and Saviour Jesus Christ. They burned him in a fire, tore him apart on a wheel, but his feet into red-hot metal shackles, poured poison into his mouth. He endured all his tortures with the power of Christ, never losing the sense of His presence. With his confession of the Christian faith and disdain for death, he achieved his ultimate victory over the world that lies in evil. The example of his faith, prayer and great exploits brought many to believe in Christ.

To us, Saint George the Victor is still a model of a man who sticks to the Truth in a world where have abandoned it. To justify their apostasy, many claim to be serving some greater good, when in fact they seek nothing but worldly benefits. But the Truth is the same at all times. The Truth is Christ Himself and the veracity of His word. By upholding the Truth, we stay on the path toward the Kingdom of Heaven. So let us care more to reflect on our actions and decisions in our worldly lives. Let us push ourselves to live by the commandments of our Lord and the high standard set by the early saints like George the Victorious.

Metropolitan Pavel of Vyshgorod and Chernobyl, Father Superior of the Kiev Caves Lavra