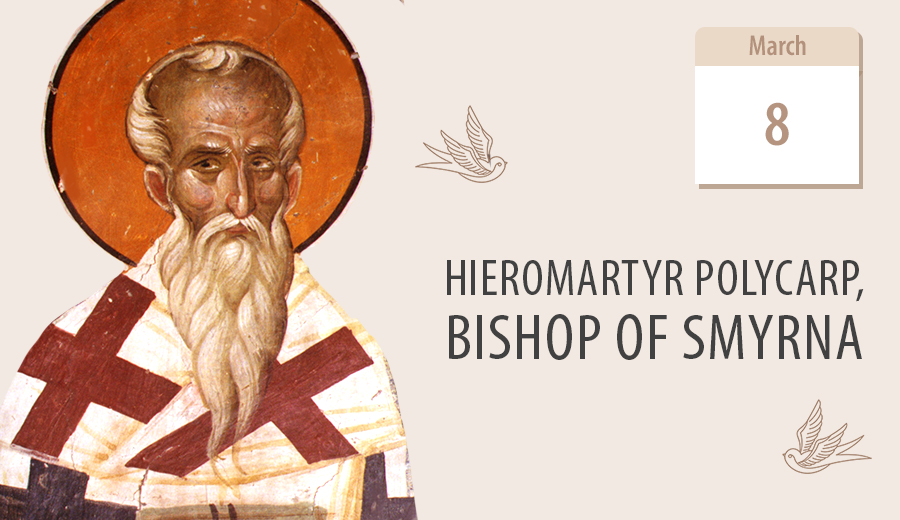 He was born at Ephesus around the year 70. He was the spiritual teacher of St. Irenaeus of Lyons, and the writings of Saint Iraneus, he knew the Apostles who had seen Christ in person. St. Polycarp was himself a disciple of Saint John the Theologian, who in his Book of Revelation (2:10) relays this message of Jesus Christ to the church of which he was bishop for many decades: “You are about to suffer. I tell you, the devil will put some of you in prison to test you… Be faithful, even to the point of death, and I will give you the crown of life”. He suffered, like many other members of his flock, remained faithful and won eternal glory in Christ.

As a martyr for his faith, he followed in the footsteps of his parents who also died for Christ and left him an orphan. A pious woman named Callista was his guardian. The boy grew up as a devout Christian and performed his first miracle as a child. On many occasions, he would give away all the food in the cupboard to the poor, but each time, the supplies were replaced. Seeing that, his guardian gave him the name Polycarpus, translating as “much fruit” (his given name was Pancratius).

As bishop of Smyrna for over five decades, he preached faithfully the word of Christ and guarded the purity of His teaching. He left a legacy of theological writings, including his correspondence with Saint Ignatius of Antioch and Pope Anacletus.

In the mid-second century, a new bout of the persecution of Christians began in Asia Minor. The saint had predicted his martyrdom and was waiting calmly for the Roman Governor's men to come and take him captive. They came in the evening of the Holy Friday. He welcomed them as guests, invited them to share his meal at the table. The men allowed him two hours to pray before they took him away, reluctantly and with remorse. When they delivered him to the governor and he offered him to renounce Christ and spare his life, the saint answered: 'For eighty-six years I have been his servant, and he has wronged me in nothing; how can I blaspheme my King and Savior?' The governor sent him to die at the stake.

When the executioner put him on a pyre and started the fire, flames rose around him like a curtain, and he was standing in the middle glowing like gold. Seeing that the fire was not harming the saint, the executioners struck him with their swords, and his blood extinguished the fire as he surrendered his soul to the Lord.