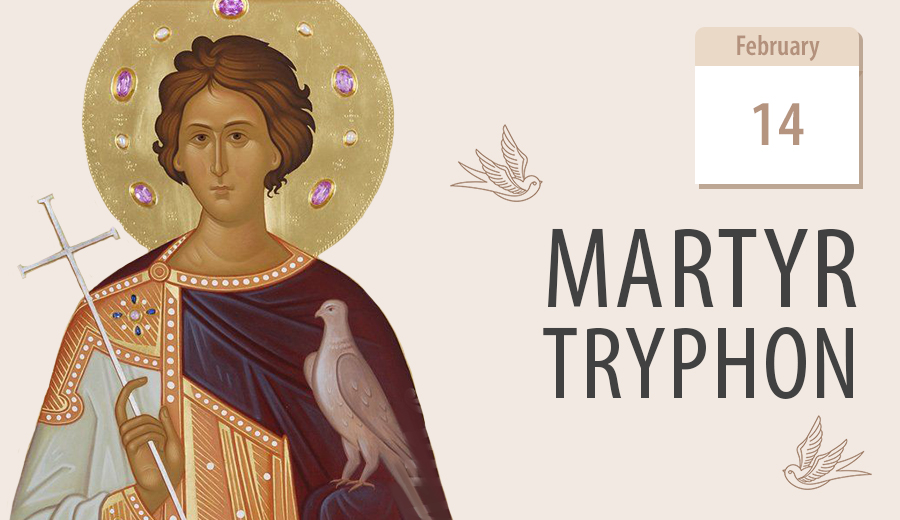 Saint Tryphon grew up in a poor peasant family in Asia Minor tending to poultry and cattle. He lived a simple life of piety and prayer and was endowed with the gift of healing and exorcism. Villagers began to turn to him for help when he was still a child. Nobody other than his fellow villagers knew about his exceptional abilities, but the enemy already saw him as a threat and trembled at the sound of his name.

His childhood coincided with the reign of Emperor Gordian. His daughter Gordia was possessed by demons. The emperor had tried every Pagan healer at his court, but no one could expel the demons. Suddenly, a demon in Gordia spoke and confessed that the only person he feared was Tryphon of Phrygia because only he alone had the power to drive him out. Hopeful, the emperor sent out his men to make inquiries, find Tryphon and bring him to his palace. After a long search, they found out his whereabouts and delivered him to the emperor. Tryphon prayed to Christ and expelled the devil from the girl, restoring her to health.

Thankful, the emperor rewarded Tryphon with lavish gifts, which Tryphon gave away to the poor on his way home. When he returned, he went back to keeping geese. He did not preach Christ, but news of his miraculous healings in His name was spreading.

When Emperor Decius unleashed his persecution of Christians across the empire, Tryphon was falsely reported as an active preacher of Christianity. Acting on the report, the governor of his province ordered his arrest, prosecution and torture, disregarding his service to the imperial court. Failing to convince him to renounce Christ with flattery or brutal force, the government sentenced him to be beheaded outside the gates of the provincial capital Nicaea.

After his martyrdom, his relics worked multiple miracles, and the city’s residents resolved to bury them in Nicaea. However, Saint Tryphon appeared to them in a vision and asked for his relics to be sent to his native village and laid to rest there. The Christian faithful have invoked his name in their prayers for the protection of fields and gardens against pests.