Two sixth-century saints who left a lasting legacy of writings 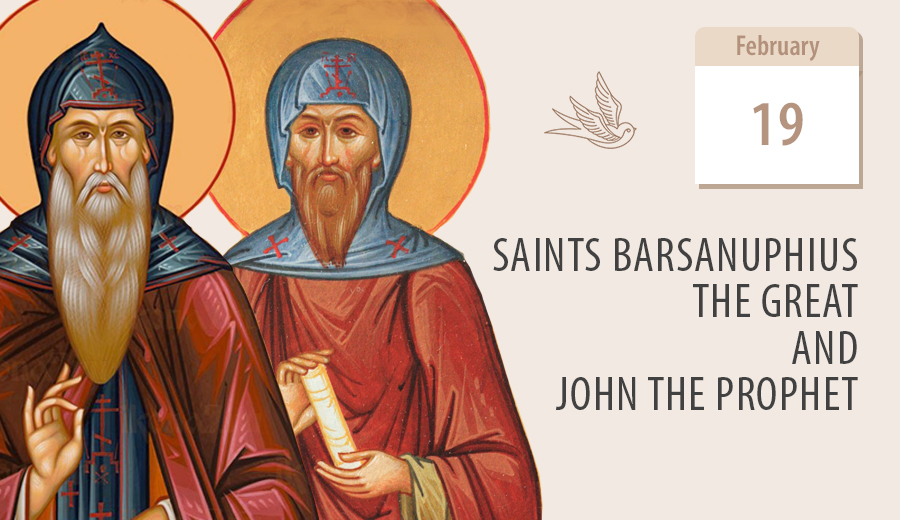 Saint Barsanuphius the Great, and his disciple, Saint John the Prophet were sixth-century saints who ascetised as hermits in the environs of the monastery of Abba Seridus in Palestine. Both received from the Lord the gifts of far-sightedness and spiritual discernment. They left a legacy of profound spiritual writings. Their teachings influenced Christian thought in the Eastern churches through the works of the Elder Paisius who had them translated into Slavonic, and the elders of the Optina monastery who translated them into modern Russian in the 19th century.

In their lifetime, they shunned fame and attention, and hence few details about their lives are known to us. Because they ascetised in strict solitude, only the abbot of the monastery saw them once a week to deliver bread and water and take their spiritual advice. The other brethren suspected that the monks were a fiction of the abbot, and insisted on seeing at least Monk Barsanuphius. When they visited him, he welcomed them, washed their feet and retired to his cell. When the patriarch of Jerusalem doubted if Monk Barsanuphius was still alive and came to check on him, fire blasted from his door to keep him from coming in.

Yet we know far more about their spiritual ascent. They corresponded with other monks and the faithful who sought their advice, and their writings testify to the high degree of their moral perfection and love for others. Their letters gave precious spiritual guidance to their contemporaries and their successors. With their prayers, they had the power to relieve people of their sins, and their knowledge of people's hearts enabled them to give advice tailored to the situation of those who asked.

Saint Barsanuphius survived his disciple St. John, but after his death took the oath of silence and never answered any questions. However, both are known as authors of the soul-profiting book called “Guidance toward Spiritual Life that inspired many saints after them, including Saint Theodore the Studite, Saint Simeon the New Theologian.