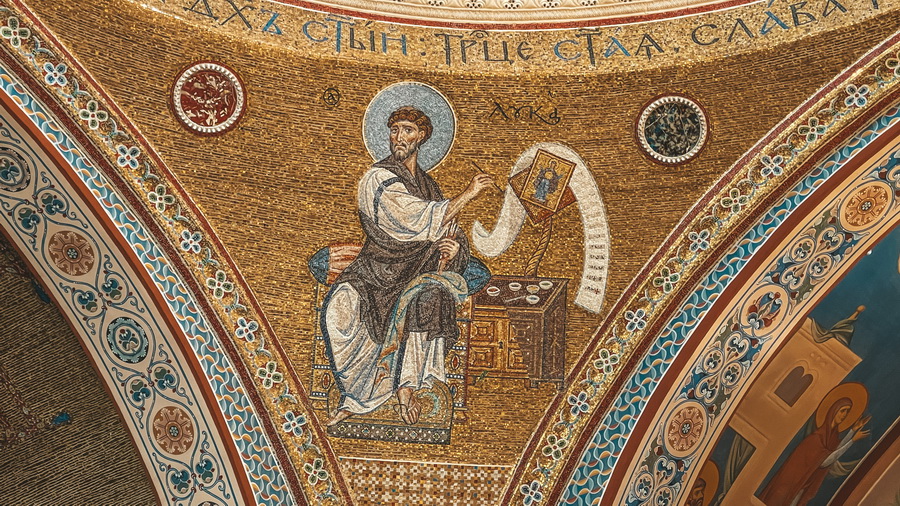 Mosaic of Luke the Evangelist - Church of the Reigning Icon of the Mother of God, Saint Elisabeth Convent

Saint Maximus the Greek said of the apostles “They are the undeceptive clouds pouring blissful rains on the Savior’s vineyards and flooding the barren lands of the wicked to help them bear fruit. Embellished with thundering truths and sparkling miracles, they proclaim the Gospel all through the universe. They chase away the darkness of superstition, illuminating the faithful with the knowledge of Christ. And wrathful nations are tamed with their word, bowing down to the Lord in proskynesis”.

Saint Luke was one of the most modest disciples of Christ. He was not one of the chosen twelve who were constantly beside the Son of God catching His every word and witnessing His blessed deeds. He was but an insignificant human grain amongst multitudes heeding Christ from afar in preparation for future harvest. And he listened, becoming wax to imprint God-Man’s words.

But why is Luke considered an apostle? That is because he was one of the seventy sent to seek and pray “ye therefore the Lord of the harvest, that he would send forth labourers into his harvest” (Luke 10:2).

Due to his selfless perseverance in quest for heavenly truths, apostle Luke’s evangelist symbol is a winged ox. St. Luke’s Gospel best represents the sacrificial aspect of the ministry of the Savior.

Answering the question “who is the most famous evangelist”, we can state that for many Christians it is Saint Luke apostle of Christ.

Saint Luke in the Bible

Apparently, as indicated in the Epistle to Colossians, apostle Luke was a physician who left his trade to pursue Christ. So, apostle Luke’s occupation was one of a doctor. Accompanying apostle Paul in his journeys, St. Luke most probably treated his “thorn in the flesh”, given to St. Paul by God so that he wouldn’t exalt himself above measure. St. Paul called his fellow traveler “the beloved physician”.

We already know the answer to the question “what apostle was a doctor?”. It was Saint Luke. But unfortunately, we are still unsure as to Saint Luke the evangelist’s date of birth. Therefore, it is impossible to answer another popular question “when was apostle Luke born?” with any certainty.

But as for “where was apostle Luke born?”, we know he lived in Antioch, a great Syrian metropolis famous for blooming arts and sciences. It was abundant in teachers learned in every field of study, and the daring youth could easily find a source to quench his thirst for knowledge. But, to everyone’s surprise, he denounced a brilliant medical career embarking on a search for a true teacher of righteousness.

Still, apostle Luke’s background is altogether dim and the only thing known of him for certain is that apostle Luke was a doctor in Antioch before leaving to Galilee. But was apostle Luke a Greek, was apostle Luke a gentile? He most likely was since he wrote in highly cultivated Greek much admired by John Chrysostom. But he could also be a Hellenic Jew since Antioch was a cosmopolitan city with a flourishing Jewish community. Therefore, we know for sure which apostle was a gentile. It was Saint Luke. As for “were any of 12 apostles gentiles?”, there may have been more gentiles among the seventy but we can only guess.

The Bible reveals no information as “was the apostle Luke married?”. He could be.

As passed down by tradition, Saint Luke was also a painter who depicted the Holy Mother of God on a board of the table where the Savior, his holy Mother and St. Joseph dined. Apostle Luke’s icon was venerated by generations of Christians and, along with his Gospel, earned him the name “second apostle Paul”. But was St. Luke apostle or disciple? Apostle Luke’s orthodox views are beyond doubt and apostle Luke’s history of service to Christ is inspiring to all Christians. Why wasn’t Luke an apostle, we don’t know. But he most definitely came to a very high understanding of the mission of Christ.

Our Lady of Częstochowa

How did Luke meet apostle Paul?

Due to increasing purges performed by the Jews in Jerusalem, Saint Luke retreated back home to Antioch where there already was a vibrant Christian community. Passing through Samaria, he got hold of Saint John the Baptist’s unperishable hand, the one that baptized our Lord Jesus (it later surfaced in Malta and was brought to Russia at the end of the 18th century).

St. Luke never sought human glory. For several years he lived quietly in Antioch immersed in regular church duties. But that changed drastically upon his encounter with the apostle Paul. St. Luke decided to accompany him on his second missionary journey. Saint Paul and Luke’s relationships were of mutual love and support. When St. Paul was in prison, the only person staying with him was Saint Luke, as indicated in 2 Timothy 4:11 "Only Luke is with me". St. Paul later blessed St. Luke to write his Gospel.

Did apostle Luke walk with Jesus? Did apostle Luke ever meet Jesus? No, he never met Him in person but nevertheless had very personal relationships with him. Saint Luke also communicated with other apostles learning to understand Christ better. As to “how did Luke meet Jesus?”, neither his Gospel nor the ones of other evangelists mention that. But the spiritual meeting certainly occurred and was profound, life-changing and overwhelming.

St Luke proclaimed Christ in Greece and Rome, later even journeying to Egypt. As to Saint Luke the evangelist’s death, the tradition gives a clue as to how apostle Luke died, or rather it answers the question “how was apostle Luke killed?” He was crucified on the branches of an olive tree by pagans. Regarding “where is apostle Luke buried?”, he died in Boeotia aged 84. There was a circular structure in Ephesus considered to be his grave because of the carving of a bull on the door.

St. Luke mastered visual arts in Antioch and used his skills for the sake of the church. He was the first-ever icon painter, preaching the Word of God in colors. He depicted the Virgin and Child and the icon was blessed by the Mother of God.

"All things are delivered to me of my Father: and no man knoweth who the Son is, but the Father; and who the Father is, but the Son, and he to whom the Son will reveal him." (Luke 10:22)

"And the Holy Ghost descended in a bodily shape like a dove upon him, and a voice came from heaven, which said, Thou art my beloved Son; in thee I am well pleased." (Luke 3:22)

Christianity spread through the feats of the holy apostles, that by far exceeded human capabilities. The messengers of Christ, including the apostle St Luke, travelled all through oecumene and beyond. Their uncharted paths led to the African deserts, the mountains of Caucasus and the far-flung British Isles.

But what was the world like at the times of Luke the apostle? It was ruled by graven passions, the strong oppressing the weak, pagan altars and shrines soaked in the blood of innocents. Nothing was cheaper than human life. A man should behave like a wolf – that is the pagan “symbol of faith”. Tolerance, hailed by the moderns, is but a fading echo of Christianity. And we can’t even imagine the horrors in store for us in case it fades.

The apostles had no weapons to defend themselves, no earthly powers to appeal to, no money to buy out their lives. They were tortured by fire and iron, stoned and crucified. But the apostles, including the evangelist Luke, persevered in faith until the bitter end.

Were they superhumans or semi-gods? Neither. Once, mistaken for deities by pagans, they exclaimed “why do ye these things? We also are men of like passions with you”. (Acts 14:15). But they were armed with faith and “If ye have faith as a grain of mustard seed, ye shall say unto this mountain, Remove hence to yonder place; and it shall remove; and nothing shall be impossible unto you”. (Matthew 17:20).

Now we can answer the question “What is Saint Luke known for?”. For his Gospels, the holy icon of the Mother of God and Child he painted and his spreading the Word with apostle Paul, proclaiming Christ and performing miracles. Feel free to tell anyone your Luke the apostle facts.

“When ye pray, say, Our Father which art in heaven, Hallowed be thy name. Thy kingdom come. Thy will be done, as in heaven, so in earth. 3 Give us day by day our daily bread. 4 And forgive us our sins; for we also forgive every one that is indebted to us. And lead us not into temptation; but deliver us from evil”. (Luke 11:2,3)

“And he said unto them, Ye are they which justify yourselves before men; but God knoweth your hearts: for that which is highly esteemed among men is abomination in the sight of God”. (Luke 16:15)

Most charming and saintly Physician, you were animated by the heavenly Spirit of love. In faithfully detailing the humanity of Christ, you also showed his divinity and his genuine compassion for all human beings. Inspire our physicians with your professionalism and with the divine compassion for their patients. Enable them to cure the ills of both body and spirit that afflict so many in our day. Amen.