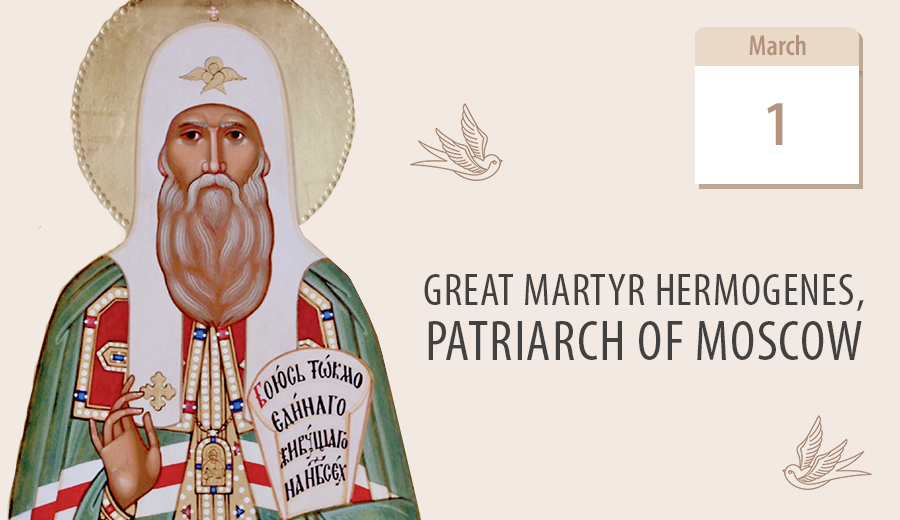 Born in Kazan in 1530, he was a man of great literary talent and had received a brilliant education. His name is associated with the discovery in Kazan of the famous icon of the Mother of God of Kazan and the relics of the Russian saints who died in Kazan during the plague epidemic and the battles for the city. He wrote moving epistles detailing the finding of the Kazan Icon and the miracles related to it, and preached diligently among the local Pagans and Muslims, converting many of them, voluntarily, to the Orthodox faith.

But when the Russian Orthodox Church glorified him in 1913, it was not for his religious ministry, but for his steadfastness in the service of the Russian Orthodox Church as its Patriarch and for his martyrdom. During the crisis of succession to the Russian throne (known as the times of trouble), the false Tsarevich Demetrius and the Polish King Sigismund settled themselves in Moscow proclaiming themselves as Russia’s rulers, After some time an impostor (known as the Brigand of Tushino) came to the environs of Moscow and claimed the Russian throne. All were supported in their actions by many Russian collaborators, who were ready to renounce the Orthodox faith and convert to Catholicism or Unitarism. In his fiery epistles, he called on them to come to their senses and not become apostates. He commanded them to give up their evil intentions and repent. His texts inspired many in Russia to liberate their land and choose a lawful Tsar.

The residents of Moscow rose, but the invaders and their collaborators burned the city, took Hermogenes captive in the Chudov Monastery in the Eastern part of the Moscow Kremlin. The rebels besieged the Kremlin, and the enemies pressured the Patriarch to order them to leave. He flatly refused, but sent a fiery epistle blessing the Russians to fight. After nine months of confinement, he died of starvation in 1612. He was buried in the Chudov Monastery, but in 1654 his relics were transferred to the Moscow Dormition Cathedral.