His endurance and love of God brought his tormentors to repentance

Hieromartyr Mark of Arethusa, a steadfast defender of the faith 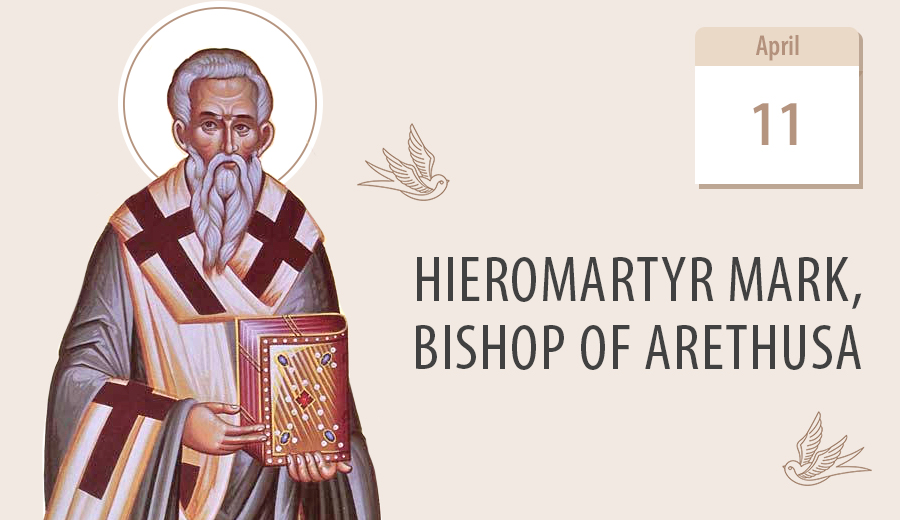 Julian the Apostate, who ascended to the throne of the Byzantine Empire, had vowed to turn it back into a Pagan state. He ordered the destruction of Christian temples and the prosecution of the Christian clergy and other faithful. In those years of darkness, Saint Mark was the bishop of Arethusa in his advanced years. A steadfast defender of the faith against the attacks of the heretics, a determined opponent of Paganism, he went into hiding to escape the prosecution. But when his enemies began to capture other Christians in his stead, he returned to the city and gave himself up to them.

His tormentors demanded from him a large sum of money for the rebuilding of the pagan temple destroyed during his bishophood. He refused and suffered unimaginable mockery and torture. They tore out his hair, beat him with lashes and cut stripes of his skin, and put him in a foot-press. Finally, they smeared him with honey and rotten fish and hung him out to be bitten by bees and hornets. Yet the saint did not seem to react to the pain, making his tormentors even more furious.

As they proceeded with the torture, however, they progressively lowered the amount they demanded from him. Finally, they stopped demanding any money. Many people present felt remorse and converted back to Christianity. Finally, his tormentors let him go. After his release, he dedicated the rest of his life to bringing Pagans to the Christian faith.

His great feat of courage is described by well-known church historians and confessors of the faith. Saint Gregory the Theologian lauded his steadfastness in his First Oration Against Julian. Theodorus of Currhus wrote about Saint Mark in his Church History. His contemporary, Saint Gregory Nazianzen thus summarised his virtues: “a remarkable old man and a very saintly old man”.