A saint who escaped worldly glory and fame

Saint Alexis: disdaining the things of the world, hastening to Christ 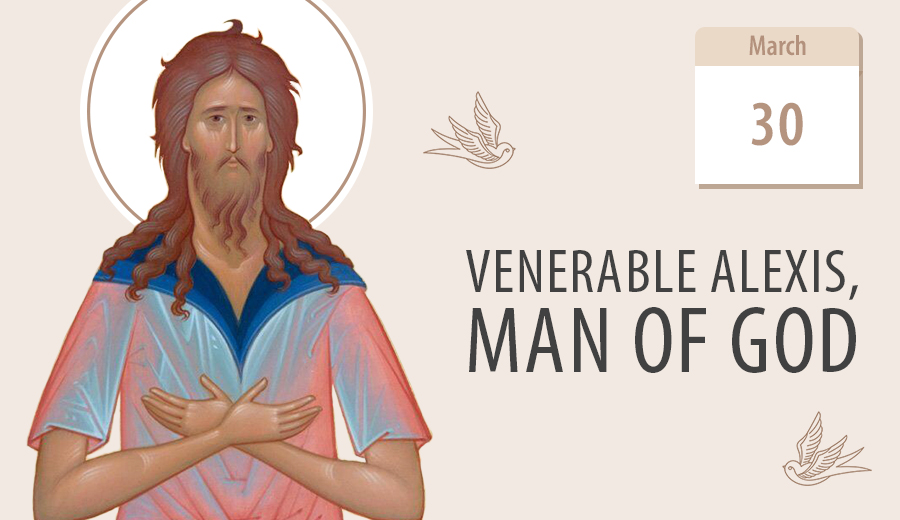 He practised fasting and abstinence for the glory of God. He eschewed worldly comforts and most of all he escaped worldly fame. Obeying the will of God, he lived in a cell in the courtyard of his parental home for eighteen years, seeing his family miss him and enduring jeers from his servants. Yet he did not reveal himself until his death. For his humility and service to God, he received the name “Man of God”.

His parents were noble and also pious and God-fearing. Despite their wealth, they fasted regularly and ate once a day. The young Alexis aspired to the life of a monastic, but his parents arranged for him to marry. Immediately after the marriage, he left his wife and sailed away to the Middle East. There, he gave away all his possessions to the poor and lived as a beggar for eighteen years. He received alms, but he kept to himself only a small portion, giving the rest to the poor. He lived in prayer and piety and avoided praise and fame at all costs.

Despite his best effort, the sacristan of the church where he was begging recognized a holy man in him. The mother of God appeared to him in a vision three times telling him to look for the God-bearing man outside his church, and finally, he recognized Saint Alexis as the man. The saint fled the city. He took a ship to sail to Laodicea, but a heavy storm blew the ship off course, landing him in Italy. Taking it as God's providence, Saint Alexis returned to his parental home, and nobody recognized him.

His father allowed him to put up a hut and live in the courtyard. He instructed his servants to bring him food from his table, but Saint Alexis ate only bread and water. He lived like this for seventeen years until the day of his death was revealed to him. To help his family recognize him after his death, he wrote a note disclosing his identity and died clutching it in his hand.

At the time of his death, the Roman Pope heard a voice from above telling him to look for the man of God who was in the city. The voice instructed him where to go. Accompanied by many clerics, he came to Saint Alexis’ hut. Alexis was dead, but his face was emitting a divine glow, and his body exuded beautiful smelling myrrh. Several people obtained healing from his body.

When his family found out who he was, they grieved at first but found comfort to see that he had found eternal glory in God. His relics were laid to rest at the Church of Saint Boniface in Rome and uncovered in 1213. Alexis the Man of God has since become one of the most widely revered saints in the Russian church.