A humble and merciful saint, unbending on matters of faith

Saint Tarasios: fighter against heresy, example of a humble life 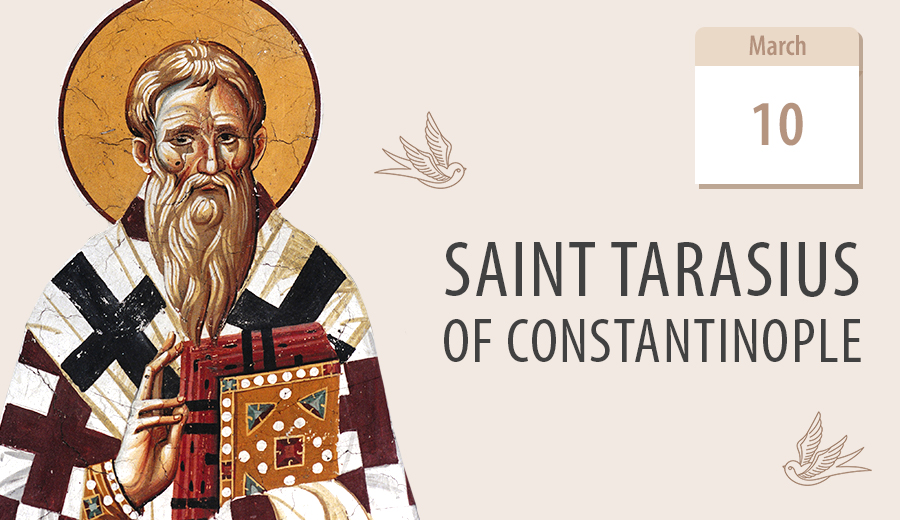 He was born of noble parents and made a brilliant career in Byzantine as a statesman. He reached a top rank in civil service in the year 780, becoming the principal secretary to the Emperor. His leadership qualities were well-esteemed, and when in 784 the Patriarch of Constantinople Paul resigned, he was called upon to become the next Patriarch. The Orthodox Church was then recovering from the extended struggle with Iconoclasm, and he was judged to be the best person to lead the process and preserve peace and unity in the Church.

As Patriarch of Constantinople, he led a simple life of humility that contrasted sharply with the lifestyles of many top courtiers and secular dignitaries. He distributed the Church's wealth to the destitute and often invited the poor to his table to share his simple meal. He also presided over many of the Church's charitable projects, including infirmaries and shelters for the sick and poor. He called for pardon and mercy for repentant iconoclasts, provoking the ire of some of the defenders of the true faith among monastics. For his humble lifestyle and generous almsgiving, he was nicknamed the new Joseph.

Yet, Patriarch Tarasios was uncompromising in matters of faith, worship and piety. He made it a condition of his enthronement as Patriarch that an ecumenical council be called immediately to condemn the iconoclast heresy. However, the first attempt to do so in Constantinople failed. In the middle of the session, a crowd of iconoclasts stormed into the church and drove out all the Church Fathers who were participating. The council reconvened at Nikea over which Saint Tarasius presided. It condemned finally and resolutely the iconoclast heresy.

For his unbending defence of piety, he suffered torments. When Emperor Constantine came of age, he sought to divorce his legitimate wife to marry his servant. The Patriarch refused to bless his sinful union and told Constantine to repent. Constantine did not listen. He committed his wife to a monastery against her will, married the servant, threw the Patriarch into prison and found a priest who blessed his new union. A year later, Constantine was dethroned and Tarasios regained his freedom.

Tarasios served diligently as Patriarch for 26 years. Despite a long and painful illness in the last years of his life, he continued to serve the liturgy. He died in the year 806 at the altar. He was buried in a monastery on the Bosphorus, and numerous miracles have taken place at his tomb.