Emboldener and protector of Christians in eternity

Saint Theodore the Tyro, rejoicing in the fount of flames 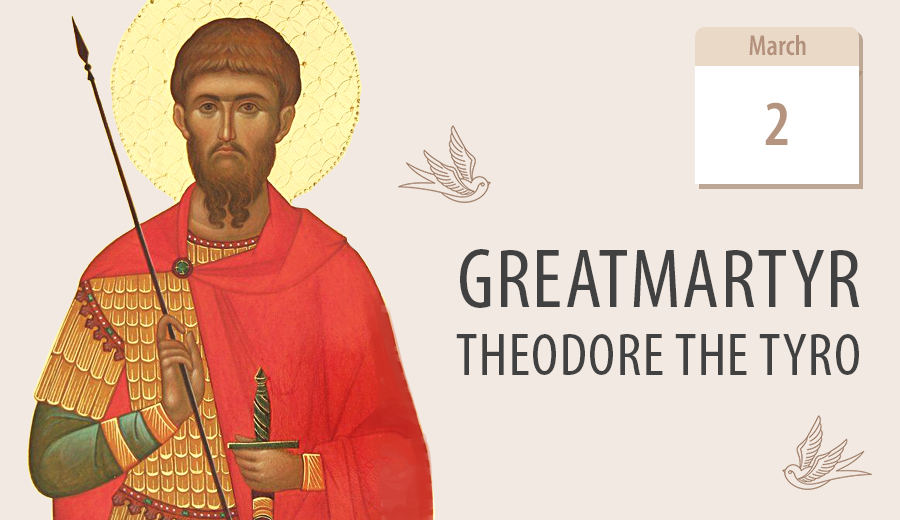 His name translates from the Greek as “conscript. He has been called up to serve as a Roman legionary, and he did so with dignity, secretly believing in Christ. One day, as his detachment was staying outside a Roman city, word reached him about a dragon terrorizing its dwellers. Fearlessly, he ventured against the dragon. He resolved to consider his victory as a sign from God to challenge the devil in the spirit. He prayed and fought the devil, arming himself with the sign of the cross. With God’s help, he thrust his sword into the dragon’s head.

Saint Theodore served during the reign of the emperor Maximian, who had launched a bitter persecution of Christians. Every soldier of the Roman Army was expected to worship Pagan gods. When the commander of his detachment commanded him to worship, he exclaimed, “I will not. I am a Christian!”.The memory of God’s help in his victory over the dragon gave him the courage. With his declaration, he inspired the other Christians to come out. After dark, he went to the Pagan temple and burned it down. The temple’s caretaker had recognized him and reported him to the governor. The saint was taken into custody and placed in a solitary cell. In the cell, he refused all food, saying that Christ would feed him. He spent his days singing hymns with the angels, making his guardsmen think that the other Christians had joined him.

Failing to convince Theodore to renounce Christ, the Roman governor ordered his torture. He withstood the most bitter torments with calm and dignity. Fearing that his behavior might embolden other Christians, the governor sentenced him to be burned at the stake. He walked into the fire and surrendered his soul to the Lord. When the fire burned out, his body was found unharmed.

Even after his death, he continued to serve the fellow Christians, delivering them from defilement. In 361, the Byzantine emperor Julian the Apostate, an enemy of Christ, ordered to sprinkle all the food at the market in Constantinople with the blood of animals sacrificed to the Pagan idols. It was the first week of the Great Lent, and Julian’s plan was not to let any Christian evade contact with idolatry. But Saint Theodore appeared in a vision to the Patriarch to warn him about the emperor’s design and instruct him to tell Christians not to buy any food at the market and eat Kolevo instead.

This started the tradition of eating Kolevo as a ritual food during Lent. It is made from boiled wheat grains and is offered in commemoration of the saints and other departed. The grain represents the body, sown corruptible to be raised incorruptible. Sweetened with honey, the food reminds the faithful about the delights of heaven awaiting them in eternity.