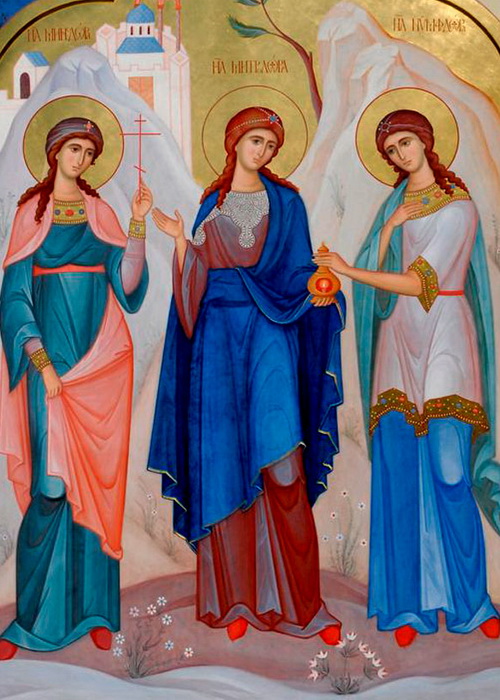 Saint virgins Menodora, Metrodora and Nymphodora were sisters originating from Bythinia in Asia Minor. Excelling in righteousness, they confined themselves to living in the desert. Fruitful years passed in fasting, prayer, disseminating the word of God and healing the sick. Eventually their fame spread far and wide reaching the ears of the cruel proconsul Phronton.

The wrathful ruler ordered to detain the sisters and bring them before the court of law presided by him. According to the usual procedure, he first tried to mildly persuade them to denounce Christ as the only Lord and Savior. The Roman authorities tolerated all faiths but Christianity since it denied the divinity of the emperor, therefore defying the imperial cult which was the cornerstone of Roman statehood.

Pagans eagerly worshiped the emperor along with many other false deities while the Christians were caught in a tight spot having to choose between apostasy and death. Some resorted to bribes, others sent their slaves or servants to confess on their behalf but the virgins exclaimed they’d rather die than crucify Christ once again deserting Him.

The furious governor ordered his cronies to torture poor Menodora first. The severity of the torment would have been unbearable if not for Christ’s love. The meaning of the name Menodora is the gift of Mene, a Greek deity overseeing the lunar months. Notwithstanding the pagan connotations of her upbringing, Saint Menodora endured all the pain and finally gave her soul to God crying out: “Oh my Lord Jesus Christ, the joy of my heart and my only hope, accept my soul in peace!”.

In a sadistic frenzy, the satrap ordered the bruised body of the Saint thrown in front of her sisters to intimidate them. But not did they falter. Crying selflessly over their own beloved flesh and blood, they adamantly took a stand in faith. Saint Metrodora was then excruciatingly tortured to death. Oh, the sweetest saint, the most precious gift awarded to a pious mother by God (The meaning of the name Metrodora is “mother’s gift”)! Let us not fall in despair for you are blissful in heavenly pastures.

The bloodthirsty henchmen brutally pushed the surviving virgin into the killing field. But the head butcher’s mood took a turn to a lighter note as if due to a change of heart. As if pitying her blooming youth, he promised all the luxuries of the world for apostasy. Hiding his sweating palms in lavish garments, he devoured her with eyes of covetousness anticipating the fall. Yet how eagerly she refused his smarmy advances!

Saint Nymphodora, contrary to her name meaning “the gift of a nymph”, was in fact a gift from God! She did not fear nor did she waver in tasting death. The youth was clubbed to death with iron rods.

The bodies of the virgins were set to be burned but a rainstorm quenched the fire. A glorious thunderbolt then torched the infamous Phronton and his accomplices. 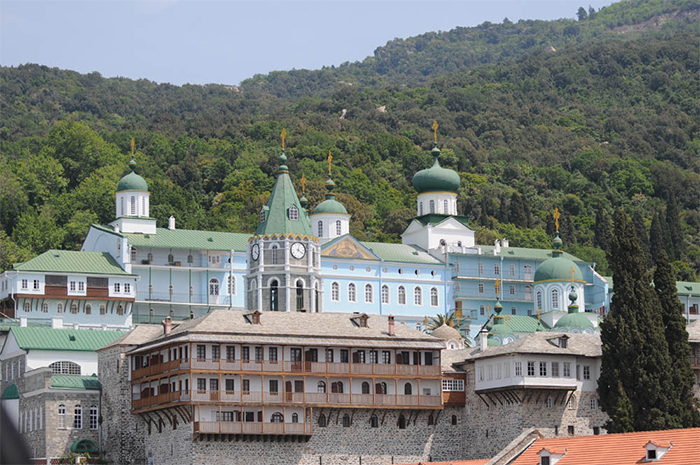 The Chrisitans buried the deceased sisters near hot springs in Bythinia. A part of their relics is kept in Saint Panteleimon Monastery on Mount Athos and Saint Metrodora’s hand is in the Athos Pantokrator Monastery.

Unfortunately, the facts about Metrodora (as well as Metrodora’s biography) and her sisters are sparse and neither we know when Metrodora was born. The virgins died a martyr’s death in about 305-311 A.D. in the reign of emperor Galerius and joined their Heavenly Groom forever.

Their feast is celebrated on September 10th or 23rd.