Christian doctors who healed with medicine and prayer

Saints Cyrus and John, healers of the body and the soul 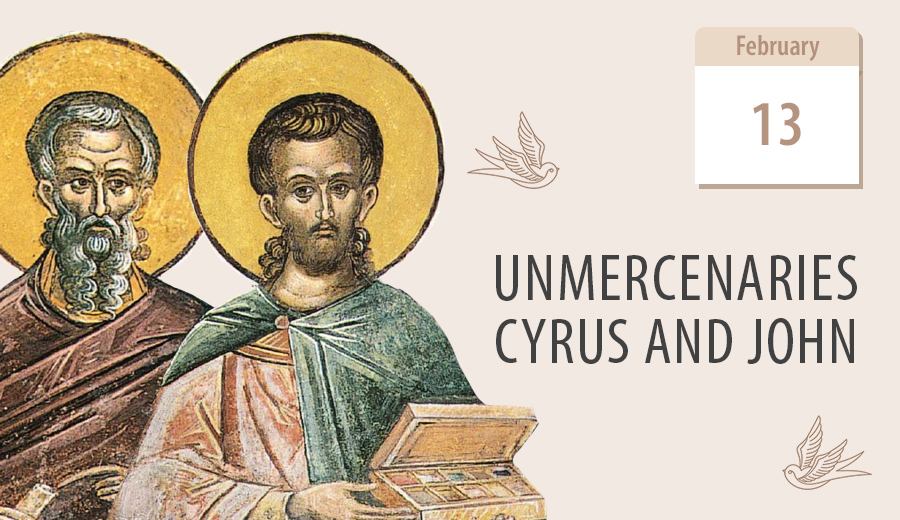 Saints Cyrus and John have been glorified as unmercenaries. They were Christian doctors who brought healing to others without any payment. Christian unmercenaries healed with medicines, and also with prayers. Their prayers still bring healing to the sick. The saints are also commemorated together, because, without being related to one another, they lived as Christian brothers and supported one another in their good works and ascetic deeds.

Cyrus came from Alexandria. He was renowned for his deep knowledge of medicine. Throughout his practice, he learned that medicine alone was not enough to restore people to health. He always advised his parents to relieve themselves of sin by repentance and prayer and to have faith when they seek healing. He would say, “Whoever wishes to avoid being ill should refrain from sin, for sin is often the cause of bodily illness.”  By his good works, many believed in Christ and followed Him.

Saint John had made a successful career in the Roman army. The Roman Emperor knew him by name. But he was also a Christian, and hearing about the exploits of Saint Cyrus, he went looking for him. He found him in an Arabian desert, where, denounced as a Christian by a Pagan, he fled persecution during the reign of Emperor Diocletian. By that time, Cyrus had won as much fame for his healing as he had in Alexandria. Cyrus and John met, and lived together, like two loving brothers in Christ, performing great deeds of asceticism.

One day, word reached them that a Christian woman named Athanasia and her daughters, Saint Theoctista, 15, Saint Theodota, 13; and Saint Eudocia, 11 had been captured for being Christians and were being tortured to make them renounce Christ. They travelled to the city where they were being held and saw them in prison to reassure them. Thanks to their visit, Anastasia and her daughters withstood all the tortures before they died as martyrs. Then the persecutors seized Cyrus and John, whom they beheaded after imprisonment and torture.

After their death, any people who invoked their names in prayer found healing. Today, Christians turn to these faiths in prayer during the Blessing of the Water, and Holy Unction. They are believed to give healing to people suffering from sleep problems.