In the second part of our interview series with Nun Euphrosyne, Mother Superior of St. Elisabeth Convent, we asked her to talk about her background and her service at the Convent.

Mother Euphrosyne, could you tell us more how you became a sister of charity, and eventually a nun at the Convent of St. Elisabeth?

Religious literature was not easily available back in the 1990s, so I was copying the prayer texts by hand. My first religious books were The Mystery of Faith by Archbishop Hilarion (Alfeev), and the writings of Monk Siluan of Athos. I read the book about St. Sergius of Radonezh in Church Slavonic with little difficulty, as if I had always known the language.

I took communion for the first time in 1994, at the Church of the Holy Apostles Peter and Paul. Every Sunday, Father Andrey celebrated weekly Akathists to Holy Royal Martyr Saint Elizabeth Romanov. Afterwards, sisterhood meetings took place at the parish house. As I stood at the Akathist, I watched with admiration the sisters of charity (of whom there were about ten at that point). They were very distinct from the other parishioners.

After the first meeting, where I had been invited together with Sister Tatyana (now Nun Tamara), Father Andrey gave me the blessing to wear the lay sister's vestment and told me that there was a great need for nurses at the nursing home for people with disabilities. As a result, I began my work at the nursing home. I was also visiting patients of the narcology ward as a sister of charity. I was 26 then.

Did you have a churchgoing family? How did your parents react to your life choice?

In one of her letters to me, my mother wrote: “You have our blessing; your mother and father will always support you.” My parents accepted my choice, even though they were not religious.

By the providence of God, you have been put in charge of this high-profile and widely known Convent. As Mother Superior of the Diveyevo Convent Sergiya (Konkova) said in one of her interviews, being in her position that of a mother superior is a great responsibility.  And being the mother superior of the Seraphim-Diveevo monastery is a great responsibility, a cross to be carried. Do you view your position at St. Elisabeth Convent in the same way?

>God chose the lowly things of this world and the despised things—and the things that are not (1 Cor. 1: 28). All I can say is that my position is one that demands a lot of humility. To me, being the Mother Superior is like wearing a straitjacket; it is also a great responsibility. In this position, one would want to stay quiet and keep a low profile. As a person, I realise that it would be best if someone else was in this position, rather than myself. But God knows better. I sometimes think to myself: “Will I ever be relieved of this constraint which taxes my humility so much. When will somebody else come to replace me?” (smiles).

I have been told that there was a different mother superior before you. She was not in this position for very long?

Indeed, the first Mother Superior was the Senior Sister of the lay sisterhood, and I replaced her after about a year from the establishment of the Convent, in March 2000. The previous Mother Superior aspired to a quiet and secluded place, but we were not like that from the very beginning. The Convent had several nearby hospitals and a nursing home. The sisters were visiting them regularly, and a large number of patients were approaching us for help. My predecessor did not want the nuns to visit the patients so much. Eventually, her aspirations were fulfilled, and she is now a nun in a quiet and secluded convent.

For someone like myself, who became a monastic after being a member of the sisterhood, it was not quite clear why monastics should stay away from helping the sick and speaking to them about Christ. Some people may find it too difficult to approach a priest with their concerns and may open up more readily to a monastic sister. The sister will then refer that person to a priest and explain the meaning of communion and confession.

To me, this would constitute missionary work in practice. I can even go so far as to call it ministry. When we act by ourselves, the Lord is acting through us, for the sake of the people, if you know what I mean. The sisters say that the Lord brought them to their senses on many occasions as they were doing their obedience and helped them find the rights words to reach out to people's hearts.

Mother Theresa, a sister of mercy and a saint canonised by the Catholic faith used to say: "I am only a pencil in the hands of the Lord". I take these words to mean this: it is not others who need you, and not you who is helping others; it is the other way round - you are in need of others and others are helping you. I could not imagine what my life would have been like had I not realised the truth of these words.

As one monastic has said to me, the joy of the Pascha is not complete if you have not visited a patient in a hospital.

Exactly. There is a genuine need to share one's joy with somebody else. To live a life of joy, one has to learn not to have pity for oneself, and one will be rewarded by the Lord a hundred-fold. One must be conscious of the needs of their neighbour and be able to share with them. The only way to know joy is by giving something to another.

As you said earlier in your interview, you took your first communion on Easter. In your view, do monastics and laypeople experience the joy of Easter differently

The meaning of Easter is transition. It is probably not possible for any living person - a monastic or a member of the laity - to experience this transition in its proper fullness. But even when one does not feel the joy of Easter in one's heart, one's spirit will still be emboldened by the good news of the Resurrection.

By taking tonsure, a person dies for the world. How should this be understood when a monastic is doing secular obedience?

Dying for the world should not be understood narrowly as a rejection of sin but as an admission of the fact that monasticism can take many different forms. Our understanding of monasticism is often one-sided and prejudiced; many imagine a monastic as someone who never speaks to anyone, never smiles, lives the life of a recluse and always looks down.

One may read a lot of books and provide a variety of quotes about monasticism, most of which will be taken out of context. In truth, there has always been a lot of variety to monasticism. For example, the Monks Joseph of Volotsk and Neil of Sora were both pursuing different ministries, but shared a common goal; they always were on good terms and had a great love for one another. At the monastery established by St. Theodosius the Great, one of the founders of the tradition of cenobitic monasteries, there were three hospitals and a church for the mentally ill.

If we had founded our convent in some remote village or in the middle of a forest,  we would have been practising noetic praying and simple crafts. But this convent grew up amid the hospitals with large numbers of patients in need of love and care. 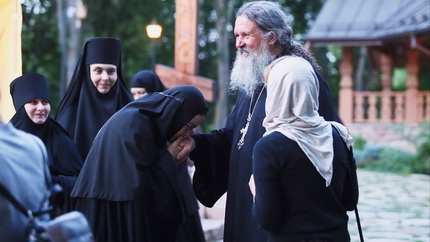 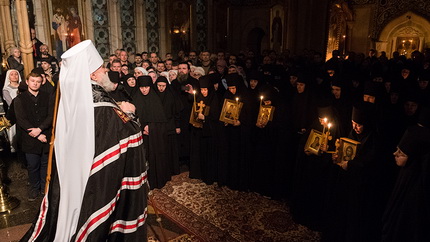 We have passed the peak of the Covid at the Convent 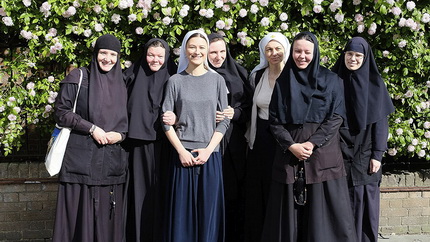 How has life at the Convent changed in light of the epidemic, and how is everyone coping? We went out and interviewed the people involved.