To us, the life of Saint Mary Magdalene is one of exemplary courage, faith and loyalty to Christ. She did not fear the wrath of the Roman soldiers to stay with Christ to the end at the moments of his greatest torment and humiliation when many of the other faithful left him. In disregard for the anger from the learned Jews who had instigated the prosecution and crucifixion of Christ, she went to His tomb to pay the last tribute to His body and witness his resurrection. In the face of the possible disbelief from the apostles, she said to them: “I have seen the Lord!”

With great bravery, she left her native Galilee to teach about Christ and His resurrection in the pagan Rome. According to legend, she stood before the Roman Emperor Tiberias, whose appointed procurator Pontius Pilate confirmed the death sentence against Jesus. She witnessed that Jesus was a holy man, a miracle worker, and powerful before God and Mankind. She told him that he had risen from the dead. In disbelief, the Emperor exclaimed: “Sooner a white egg will turn red that someone will rise from the dead”. With the words “Christ is Risen!” Mary Magdalene handed him a white egg that turned red before his eyes.

There is a strong spiritual link between the life of Saint Mary Magdalene that of the patron saint of our Convent, the Holy Martyr Elisabeth Romanov. Like Saint Mary Magdalene, Saint Elisabeth dedicated her estate to the service of Christ and the least of His brothers. The charitable monastic community that she established was named after Mary and Marfa, the holy myrrh-bearing women of whom Mary Magdalene was one. In her life, Elisabeth Romanov was impressed by her visit with her husband to the Church of Mary Magdalene near the Garden of Gethsemane, and her conversion to Orthodox Christianity happened soon after that. Her relics and the relics of her follow nun Barbara was laid to rest there in 1921 three years after their martyrdom.

Saint Mary Magdalene’s exceptional courage and dedication are as important to the Christians of today as they were during her life. We need these great virtues to remain faithful to Christ, to trust our lives to God’s will, and to accept His will, even when it is different from our own. We follow her example in our service of God and to our loved ones, and in giving our alms to the needy and the vulnerable. May we all light of Saint Mary Magdalene’s righteous life shine on us as we are preparing to sing glory to her at the all-night vigil and liturgy.

Sharing the Joy of Christmas with our Online Christmas Market 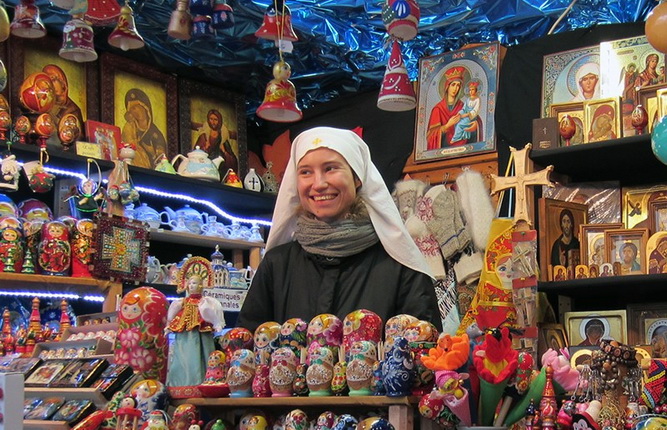