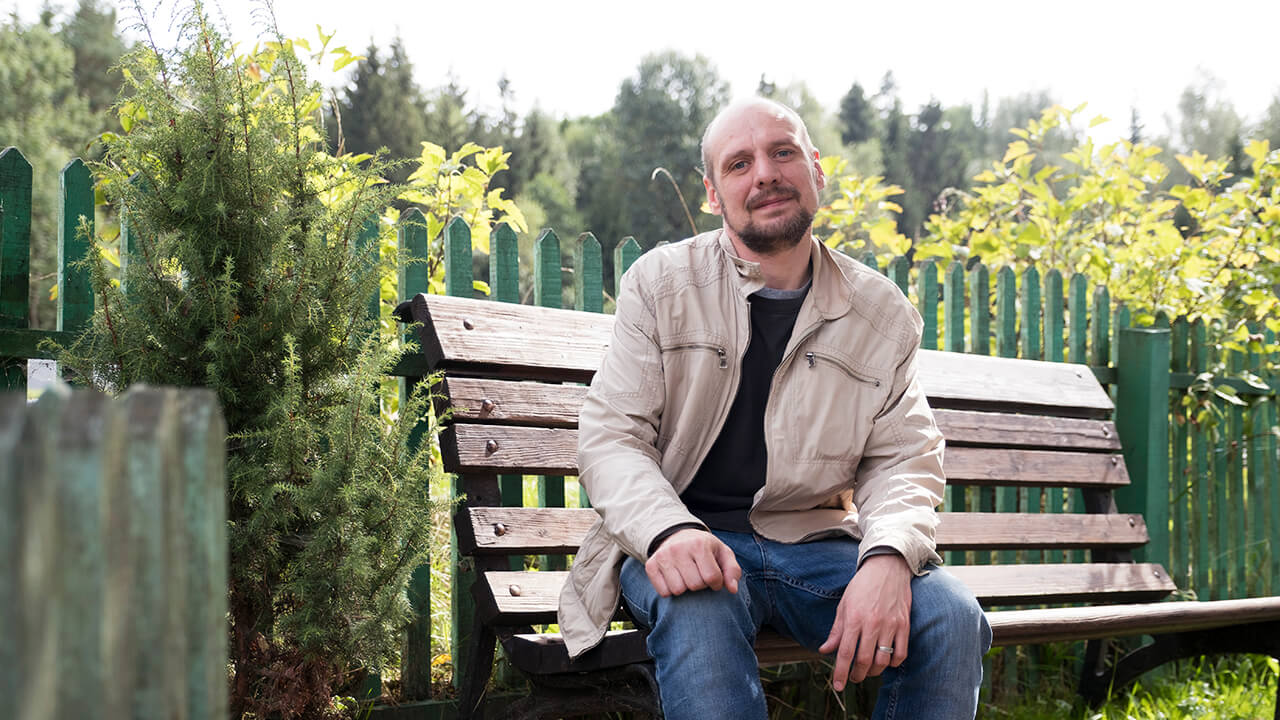 «It was a mad race downhill, and eventually I would have crashed at some sharp turn»

Speaking about my life before knowing God, I would say that I was living with the feeling as if I had the green light everywhere, that I could do whatever I pleased, and there was nothing to stop me. I was having a lot of freedom. I had nobody but myself. It was a mad race downhill, and eventually, I would have crashed at some sharp turn.

My parents had four children, and I was the youngest of the four. Things became very tough for them in the 1990s, and two of their youngest children - me and my brother ended up in a boarding school. At ten, I was already living separately from my parents.

The first year was very hard, but eventually, I came to appreciate my freedom. I was having more and more of it, and I was excited. I travelled around a lot, I could leave for the weekend and even for the school break, without telling my mother. She always thought I was at school. The gatherings and get-togethers, the alternative music, the beer and even the pot - I had it all. In my immature mind, I thought that I was having a great life.

After leaving school, I went on to study at a postsecondary institution for a profession in agriculture. But I had little interest in it. I was called up to the army and thought that I would find some interest there. After the army, I enrolled in a course for non-commissioned officers of the police and joined the police when I completed it. I married, by my marriage did not last. We divorced after two years. Increasingly, alcohol was entering my life; I was becoming dependent on it, and would not listen to anyone around me. I began to have problems on the job in the police, and I had to resign. My relationship with my older brother and sister soured beyond repair. They wanted me to make some progress in my life, and to aim for something good; instead, I was spending all the money I was earning on parties and basic needs, and never cared to think about tomorrow. 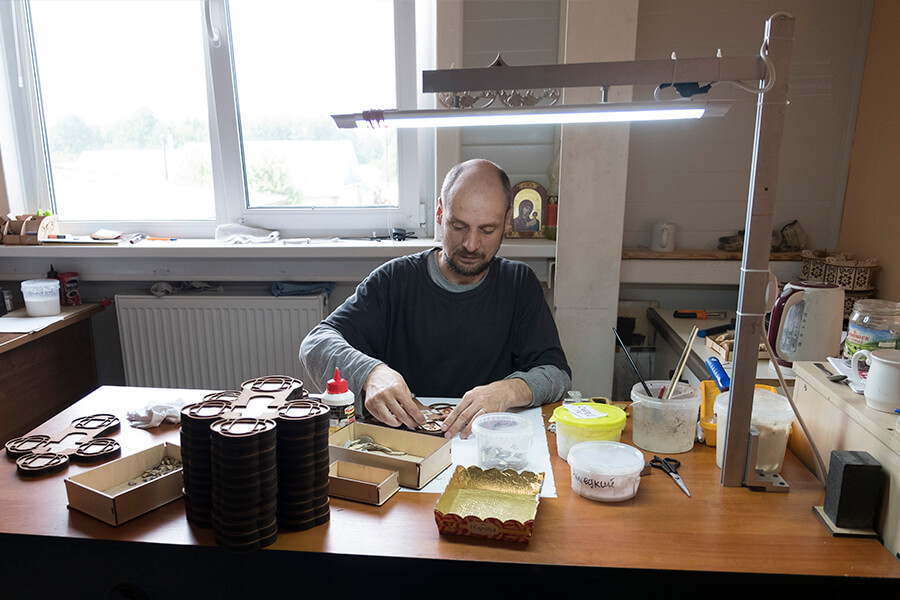 Eventually, I turned to smuggling. I was travelling a lot in Belarus, Russia and Poland, buying and selling things at a profit. Sometimes, I would get into trouble with the law, but my mother and father always helped me out. One time, they were powerless to help, and I was arrested as a suspect in a criminal case. The investigation lasted a year and a half. Eventually, the case was closed, but I have had to spend time in several pretrial detention facilities in Belarus.

I still desired to live a normal life, to become more respectable, to start a family and raise children. But I kept putting off the important decisions that were needed for this until later.

A taste of God's help and blessing

My first visit to a monastery happened in 2003. It was the Monastery of the Holy Dormition in Zhirovichi. I kept coming there at the most difficult moments in my life. To me, it was like a lifeline. I stayed there as a volunteer to recover spiritually and physically from my drinking bouts, and I left immediately when I felt restored. On one occasion, one hieromonk said to me upfront: "you come as black as an army boot and leave like a pink newborn pig".

When I was a new convert, God's blessing came to me easily, I stayed in Zhirovichi for longer periods; afterwards, I came less and less frequently. At one point I realised that I had not been there for almost four years.

When I was in pretrial detention, the other people there told me about the farmstead of Saint Elisabeth Convent. They were very complimentary in their comments, but I just could not realise why, they were in jail, and not over there if they were treated so well as they were telling me. 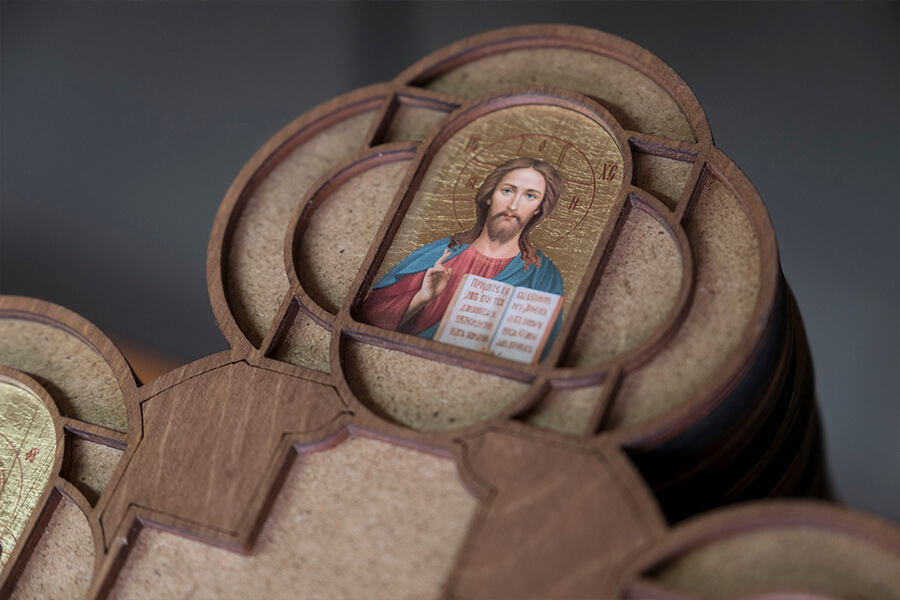 The process of creating a cross using laser engraving

I was released in May 2011. I moved to Minsk and found a job at a construction site. At first, I thought I had no reason to go to the farmstead. But my alcohol dependence was worsening, and I felt that I needed to start doing something about it. I also wanted to stop being a loser. I finally made up my mind and came to the Convent to speak to Father Andrey. I waited in a long line before he could hear my confession, and finally got his blessing to go to the farmstead.

At the farmstead, I got to work with enthusiasm like in the old times. I was feeling the grace of God as if a new life was beginning for me. We were repairing the house where we were living. We were doing it with our own hands. Some of us got to paste the wallpaper on the walls for the first time in their lives. They did not do a perfect job, but they did it themselves.

We were also rebuilding the Church of the Nativity of John the Forerunner that stood at the local cemetery. Specifically, we were working on the iconostasis. To us, this was a real miracle, considering our past lives that were so full of sin. Many of us got to do the jobs that we had never even dreamed of doing before.

After several months at the farmstead, I came back to the Convent for other obediences. I was invited to work at the printing house. As I was working there, a sister asked me to help her move around some patients in wheelchairs at the children's care home. Something ticked inside me when I first came to the ward. I was willing to spend more and more time with the children there. I wanted to be of help and of use to them. It is all women working there for the most part; I liked coming to the activities with the children, to feed and play with them. They are special children, and they see the world very differently. They can help you discover the beauty of the usual things. Speaking about one of these special children, Father Valery Zakharov said: "He is not strong enough to get up and look out the window without someone helping him. But he is smiling nevertheless. He is happy over things we barely even notice". 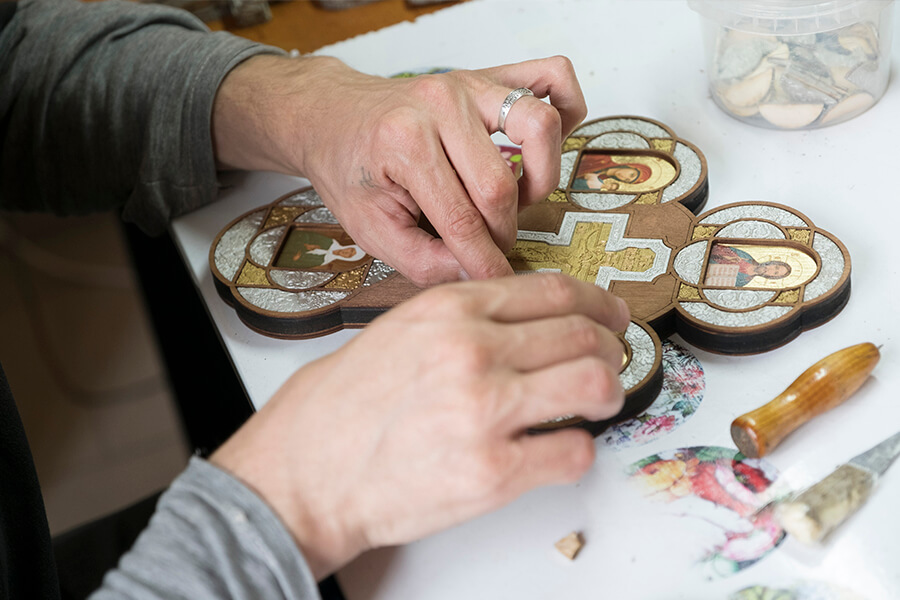 The process of creating a cross using laser engraving

God's mercy and the power of forgiveness

Father Yevgeny Pavelchuk, who used to lead a sobriety group at the Convent said: we know what it is to be mired in sin, but here at the Convent we have been cleansed of it. It is a great blessing that the Convent exists, that its sisters are doing their unique and valuable ministry trying to help the people who have erred in their lives and lost everything. They are ready to forgive their brothers who have erred time and again. This is truly the place where one comes to realise the magnitude of God's mercy and how much He has helped you. This is also a place where you can hope for His forgiveness.

Before coming to the farmstead I happened to talk to one of the brothers who had been there. He spoke bitterly with a lot of anger. He said he had been exploited. I did not believe him. He admitted to having left the farmstead and falling back to his old ways. I thought to myself, "But they have forgiven you". As found later, he was forgiven many times.

I myself was so attached to my sinful ways that I found it very hard to change. I was volunteering at the care home, and having a paid job at the Convent. With the money came the escalating needs. At the farmstead, I could easily do without a mobile; at the Convent, I had the acute need to acquire a phone and not a simple one, but a smartphone. The enemy was not sitting idle. I began to judge others, lost my temper but realised quite quickly that I was wrong. I asked for forgiveness and returned to the farmstead.

After six months, I came back to the Convent. I lived in converted dwellings, was working in a church shop, but I was still erring, losing my temper and absconding. I was forgiven many times. It came to the point of becoming a constant and comfortable cycle: I erred, repented and I am forgiven. I know I could have worked much harder and struggled more to keep myself from falling. Ultimately, I left the Convent altogether to live in the world. I was still holding on to my job here. I gradually stopped coming to the care home, although I did help look after the children at the summer camp.

I remember at one point when I went to the city, I visited nearly every hang out there but was still overwhelmed with great sorrow. I was on the brink of getting on drugs. My girlfriend helped me out then. She called a doctor and had him put me on a drip. Then she asked me to go back to the farmstead. 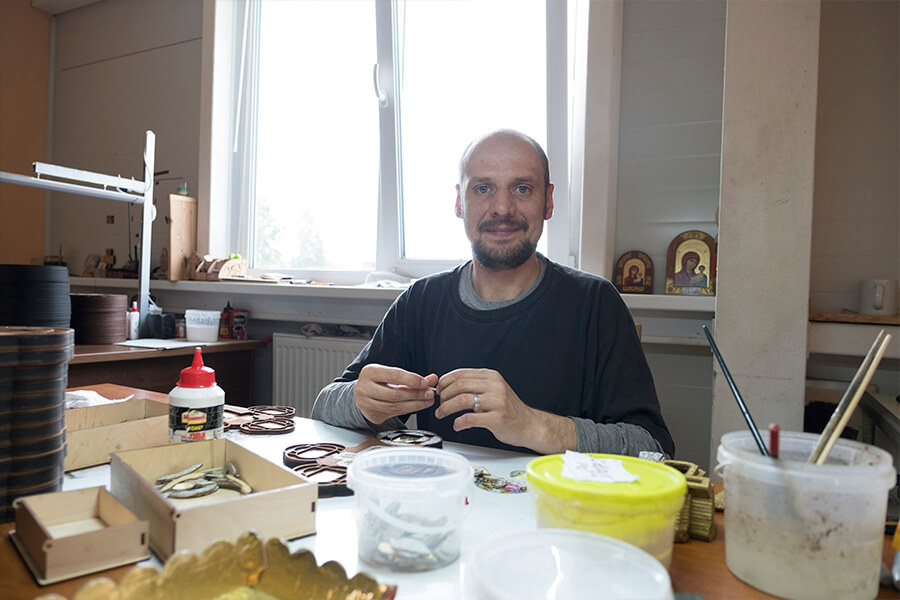 Lifting myself from the abyss, little by little

As father Yevgeny liked to say, you need to free the space in your soul for letting in the Lord by clearing it from sin. It is up to you to get rid of the sin, to love the Lord more than you are attached to your old sinful ways. Referring to the Holy fathers, he explained: "dependence is an affliction, and it cannot be overcome without the help of the Lord. You need to pray to Him, and you also need to make your own effort to eradicate sin, the antithesis of God's love from your heart."

When I returned to the farmstead, I was immediately assigned to a job at the laser engraving studio. I am now making icons. God gave me another chance.

I still cannot say that I have reformed, but I understand that the Lord acts in His own ways that may not be immediately known to you. My great achievement so far is to have been sober for over a year. As for the future, I am not making too many plans or promises for it. The best I can do for now is stay here. To start with, I need manage to stay out f drinking for three years and then see what comes next. 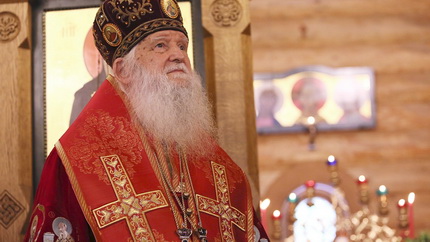 A Christian's long and arduous journey to salvation 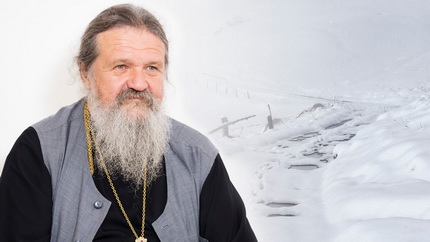 In the context of the debate on Christianity and modernity, the spiritual father of Saint Elisabeth Convent Archpriest Andrey Lemeshonok shares his views on the challenges of becoming and remaining a Christian in today's world.