How St Elisabeth Convent was born

Lay and monastic sisters have worked hand in hand in the Sisterhood of St Elisabeth Convent in Minsk for over two decades. Following in the footsteps of their heavenly patroness and with the blessing of the Very Rev Andrew Lemeshonok, the spiritual father of St Elisabeth Convent, the sisters carry out the Lord’s commandments in the places where love and care are especially needed: in hospitals and boarding homes for children and adults, as well as in several rehabilitation centres for drug and alcohol addicts.

More than three hundred sisters work in the Sisterhood now. Among the people, they care for are the patients of several hospitals in Minsk, including residential care facilities for children with special needs and mentally challenged adults. The hospital board has approved of the sisters’ actions, and they were even invited to build a small hospital church.

Liturgy at the boarding home for kids

More than 300 sisters carry out their obediences in the Sisterhood. The Sisterhood also offers rehabilitation to people who suffer from alcohol and substance addictions. The sisters run two rehabilitation centres and sustain them mostly with the funds that they earn by making various church supplies and other products.

Father Nicholas Gurianov from Zalita Island was my spiritual counsellor for two decades, — Father Andrew says. — One day, I came to him together with some sisters. They wore white kerchiefs and white aprons. When Father Nicholas saw us, he said, “Look at these white nuns!” It was on that day that he blessed us to plant the Convent. We complained, “Father, we don’t have any money.” He responded by giving us a small bill, “Here you are, take this small bill, and people will bring you the rest.” He was right: people keep bringing us more even today. The buildings that are being constructed on the grounds of the Convent — of which there are plenty — are the “rest” that he was speaking of.

A kolkhoz donated a plot of land in a village called Lysaja Hara 19 miles from the Convent to our community in 2000. The land hadn’t been ploughed for a decade. It consisted of clay and rocks — doesn’t sound like fertile land, does it? There was a half-ruined cowshed on that land, too. We spend that summer making it liveable.

Finally, we managed to organise a full-scale rehabilitation centre for people in difficult life situations, those crippled by sin (the homeless, former prisoners, alcohol and drug addicts), and the less able.

Nun Tamara who was in charge of the Rehabilitation Centre for three years, says, “The fact that the brothers obey us nuns will probably remain a mystery and a miracle for me and for other sisters forever. Anything could happen here: murders, arsons, armed conflicts among the residents. Imagine a hundred of alcoholics, junkies, and murderers, and two nuns in charge of them! I’m scared even to think of what could have happened. Nonetheless, thanks to God’s grace there was nothing bad at all.”

Currently, there are 170 brothers under the supervision of the nuns in the Rehabilitation Centre. The Convent supplies them with everything they need: clothes, food, hygiene items, medicines, etc. The brothers work on construction sites, in the cowshed, in the vegetable garden, in the pigsty, and other places. All workers receive wages.

Little by little, new living quarters, a refectory, and a church was built. The brothers attend Liturgies, confess and take communion, have a general assembly and talk with their spiritual father on a weekly basis. They take turns in reading the Psalter round the clock.

There is an Akathist to the Inexhaustible Chalice icon of the Mother of God and a Liturgy every Wednesday. There is a Liturgy and an All-Night Vigil every Saturday, on Sunday eve. There are also Sunday school classes for those who wish to learn more about the basic tenets of Orthodoxy.

Abstinence from alcohol and drugs is an important condition of staying in the Rehabilitation Centre. At first, the spiritual “therapy” didn’t seem to help: if one of the residents had started drinking, the majority of the residents would follow his example.

— Of course, they fall sometimes, — Father Andrew admits. — You can’t expect from the people who had spent their entire lives drinking or jailed to improve immediately and to be creative. They will fall and fail, time and time again. What makes me especially sad is when I feel suspicious and distrustful of those who lie to me again and again. We all come and repent but then fail to live up to our promises, don’t we? The Lord forgives us, so we have to forgive others, too.

Regular visits to the people who are isolated from society to a certain degree, conversations with them, spiritual and emotional support are among the priorities of the Sisterhood. The sisters talk about God and listen to the patients’ problems and needs. They read spiritual books and help the patients to get ready for the Sacraments of Confession and Communion.

At times, females who found themselves in difficult circumstances also turned to St Elisabeth Convent. Due to this fact, the nuns decided to launch a separate Women’s Rehabilitation Centre. They found a plot of land where there had been a military base with a church in honour of St Sergius of Radonezh.

The Women’s Rehabilitation Centre of St Elisabeth Convent was laid down near v. Nelidovichy, 4 miles from v. Vishnevka, in 2011. Today, it is home for women in critical situations, e.g. those who suffer from alcohol and drug abuse, former prisoners, homeless and unemployed women. Everyone willing to change something in their lives can get shelter and find a use for their abilities here.

At present, there are about thirty women in the Rehabilitation Centre. They are overseen by Nuns Barbara, Vassa, and Maria. They stay in a two-storied building, 3-4 persons in one room. The women eat together in a refectory three times a day.

The nuns who carry out their obedience in Nelidavichy are in close contact with child protection services because there are several mothers with children among the residents of the Rehabilitation Centre. They live separately in two detached family houses. These women have already witnessed a miracle in their lives: thanks to the nuns’ support and assistance, they have managed to remain with their children.

Starting in October 2013, there is a Divine Liturgy celebrated in the Women’s Rehabilitation Centre every Tuesday. Presently, it is celebrated in a small lower church in St Sergius of Radonezh Church.

The female residents of the Rehabilitation Centre carry out their labour duties according to their strength and abilities. They mostly work in a vegetable garden, do handicrafts, and take care of domestic animals.

Of course, there are some seasonal tasks. For instance, they grow oyster mushrooms in cellars in winter and gather medicinal herbs (nettle, St John’s wort, etc.) for our herbal workshop in summer. There are bookbinding and a sewing workshop in the Centre.

Aside from hospitals and rehabs, the sisters of St Elisabeth Convent carry out their obediences in church shops in various locations around Minsk. An Orthodox sister wearing a white kerchief with an embroidered golden cross is one of the first people whom the visitors of our city meet at the main railway station of Minsk. The sisters raise funds for the Convent and for the cause of charity. They accept prayer requests, too. There are ten such locations in the city, plus 60 church shops with the products made in St Elisabeth Convent.

Apart from their fundraising efforts, the sisters do their best to educate the inquirers about the life in the Church, comfort and inspire people, invite them to come to Church, and help those who don’t believe to remember about God and the Church.

Many sisters say that their obedience is more like a lifestyle choice. In order to have enough power to bring love and care to other people, one has to have access to a source of this power. That is why the sisters often confess and take communion.

Currently, there are 130 nuns and novices in St Elisabeth Convent and about three hundred lay sisters who live elsewhere and have their own families but come to work for the Sisterhood in the hospitals or other locations. Unexpectedly for the sisters themselves, the initial project of the hospital church grew into a huge monastery compound with two magnificent churches, a belfry, a tower, dormitories, and a refectory.

The workshops of Saint Elisabeth Convent

The idea to set up manufacturing workshops came about after several unsuccessful attempts at getting a loan in a bank.

We needed money for construction, — Father Andrew says. — I went to a bank and tried to convince them to give us a loan. Unfortunately, I didn’t succeed. I had to refocus on the idea of earning money with our own hands. That was how our workshops came to be. Today, we have more than twenty workshops, e. g., an icon-painting studio, a sewing workshop, an icon setting workshop, a ceramic workshop, a stone workshop, a joiner’s shop, etc. We even plan to create remote workplaces where disabled people could work from home. Do you remember Got Talent show? We are looking for people who have got the talent to do creative work and will offer them decent employment!

Opening of the sewing workshop

Countless products are made in the Convent! The sisters even produce films and record audios, e.g., short stories for children. The Convent provides employment for over five hundred people. Some of them used to be patients of the National Applied Research Centre of Mental Health and were unable to find jobs in the city due to their health issues. All employees receive wages equivalent to the remuneration at other enterprises. Goods made in St Elisabeth Convent are in great demand both in Belarus and abroad.

A convent is usually seen as some quiet and secluded place. However, our sisters travel to the USA and Australia and offer our goods, — Father Andrew says. — When the two parts of the Russian Church weren’t re-united yet, we were already making a shrine for the relics of St John in San Francisco.

The sisters participate in fairs and markets and organise Orthodox festivals in small towns. They don’t just sell their goods but also have missionary talks, show Orthodox films, and do concerts (there are two amazing professional choirs in the Convent: the Monastic Choir and the Festive Choir where lay Orthodox singers can serve God with their talents). 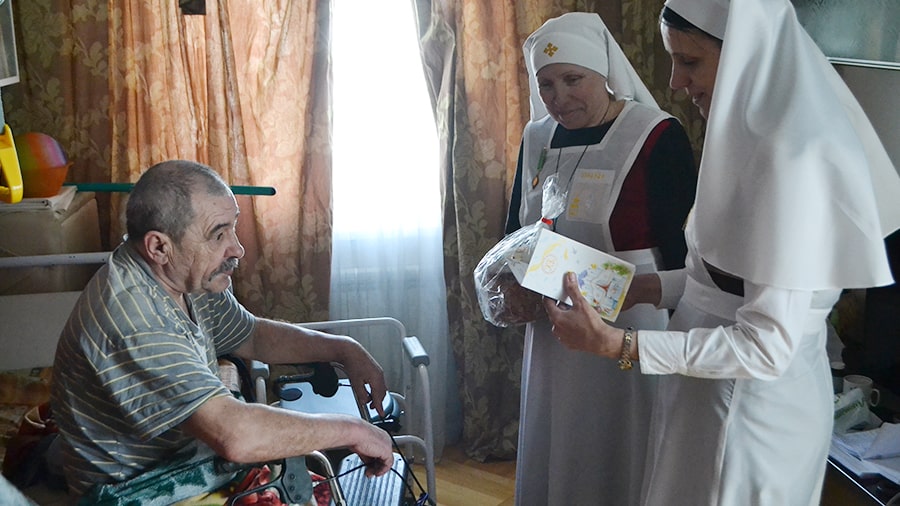